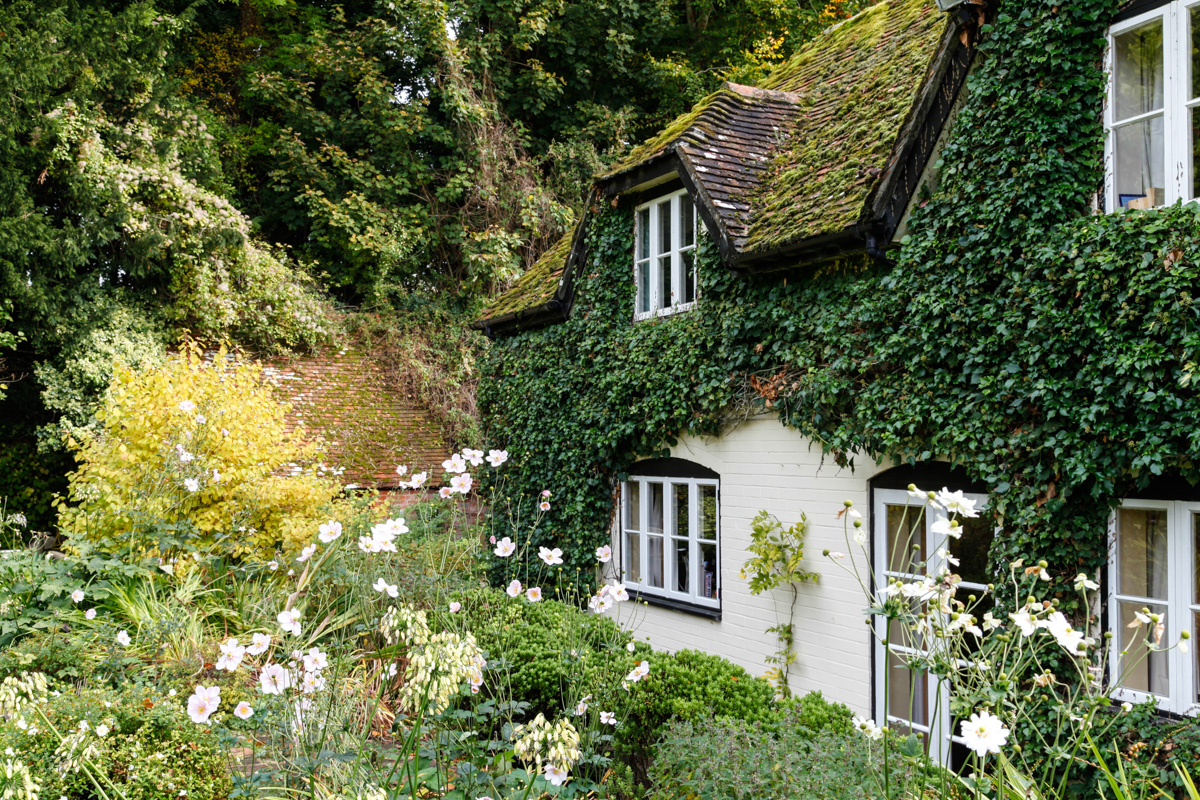 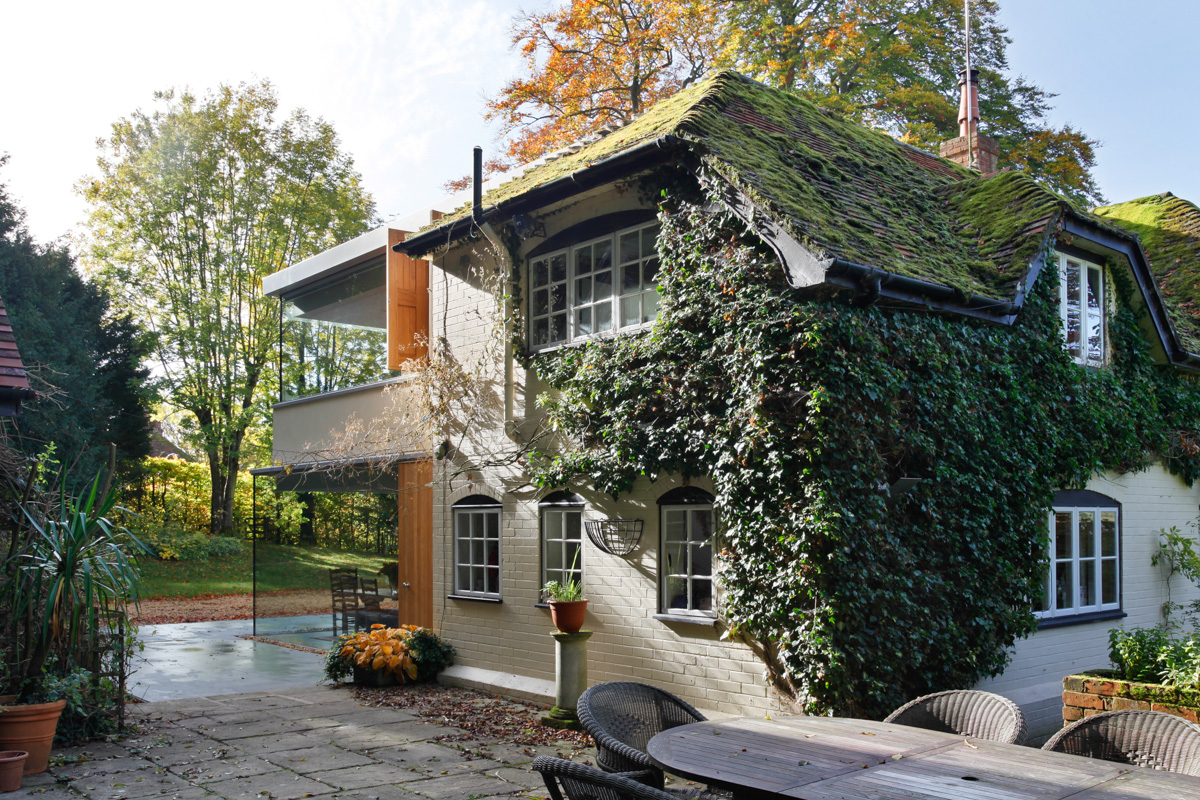 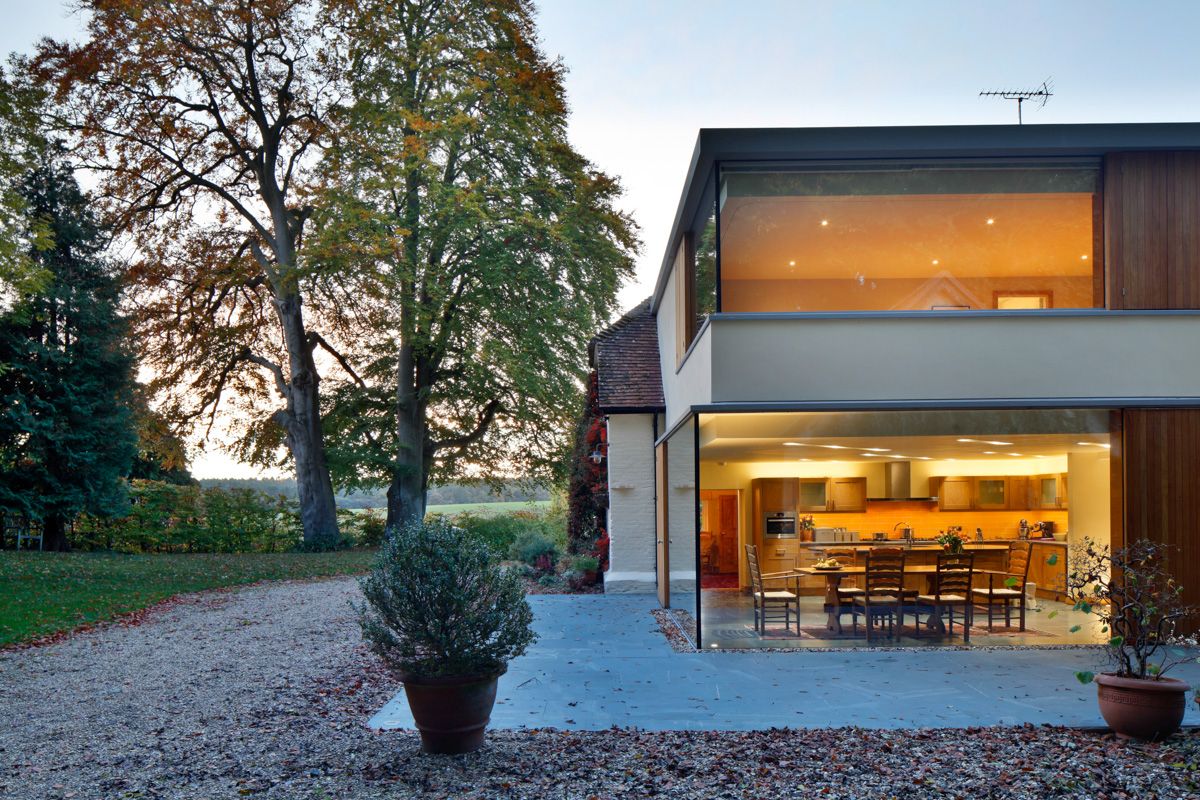 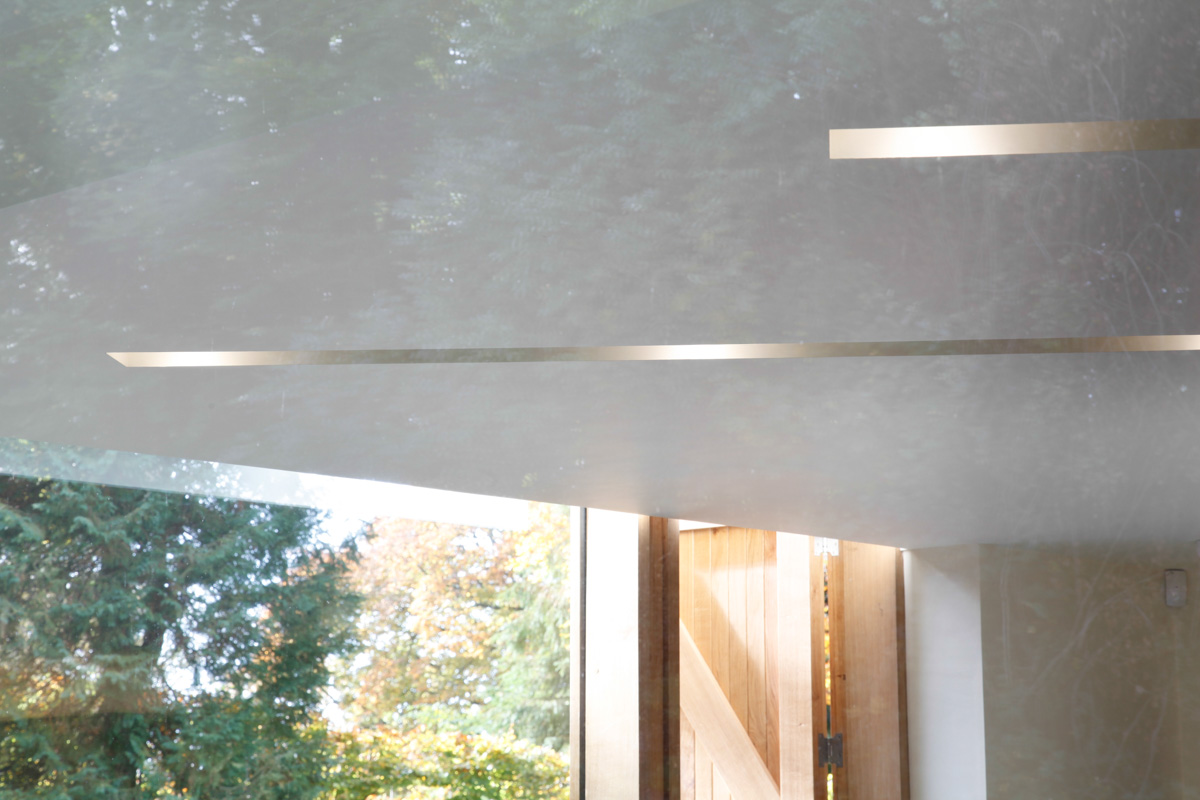 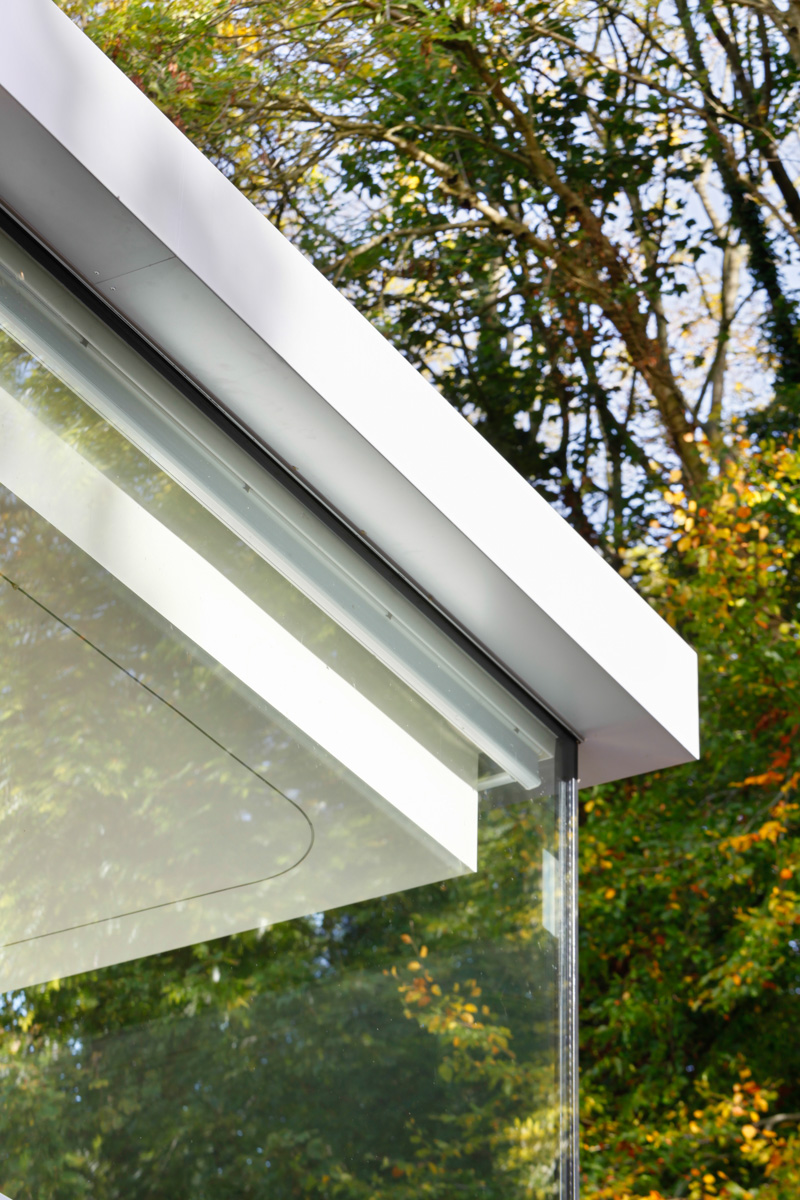 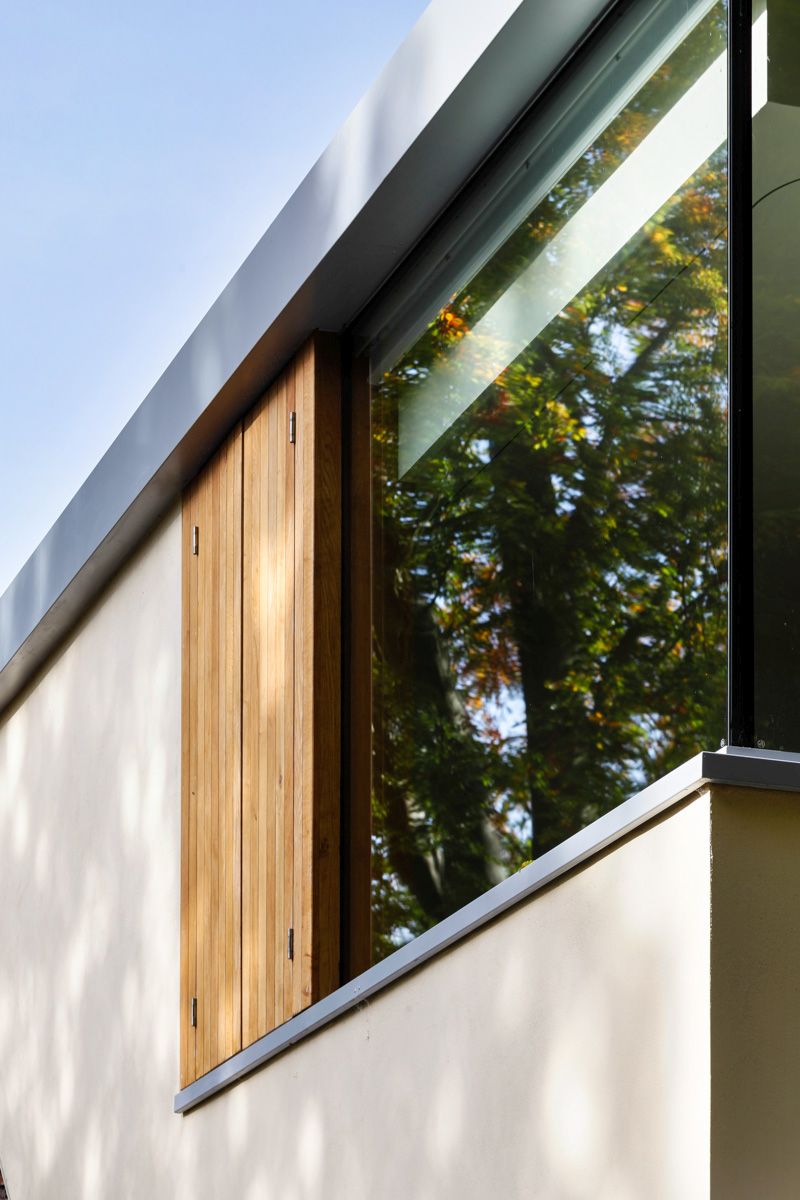 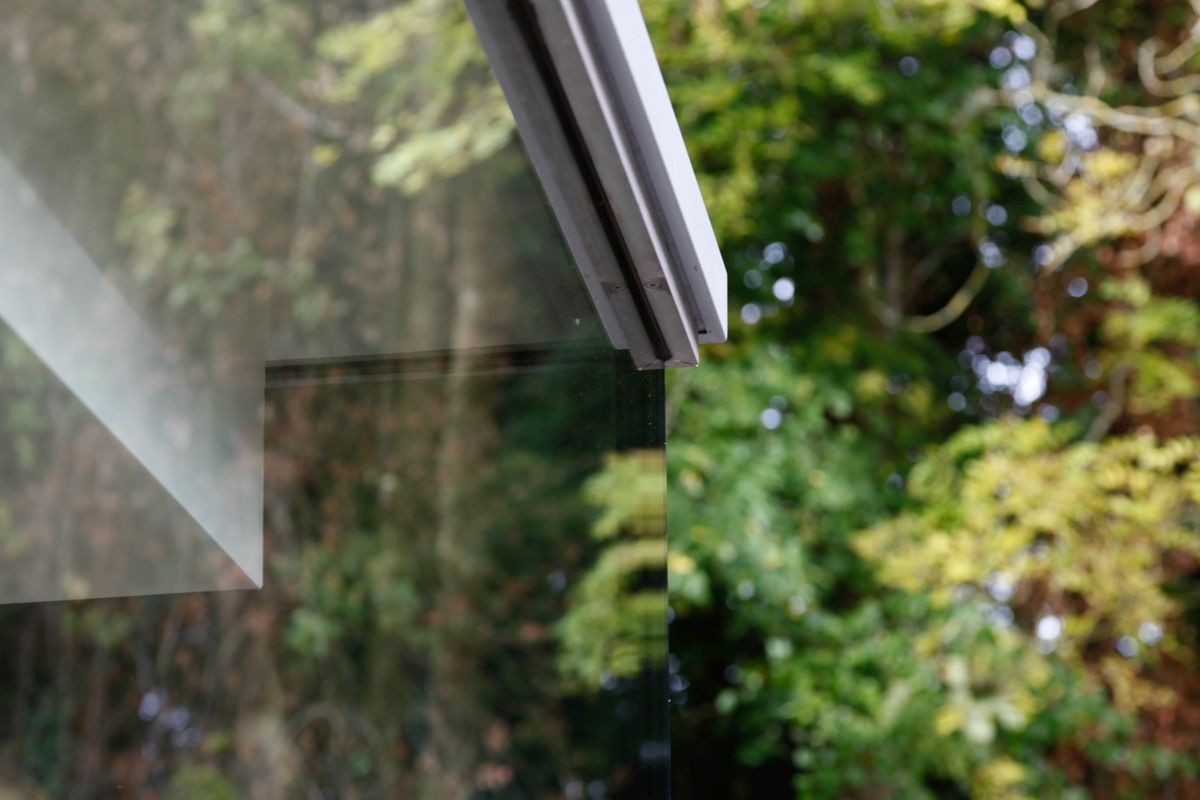 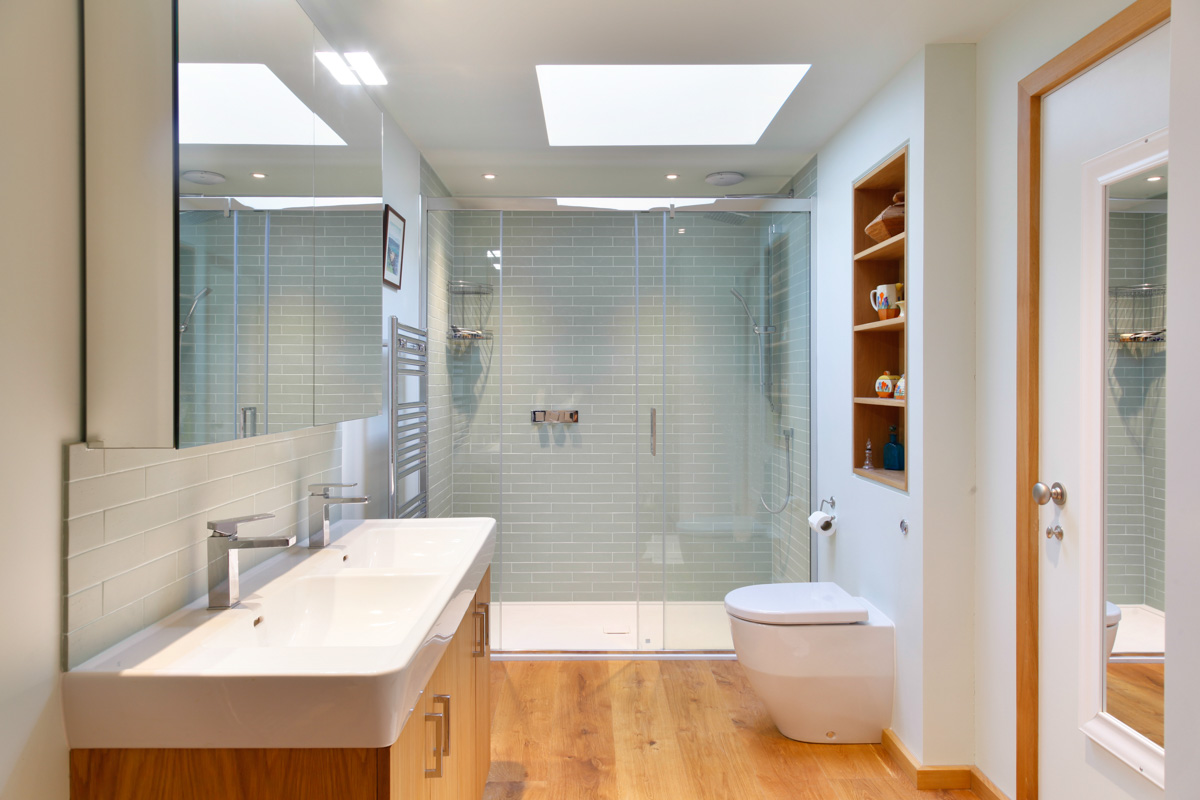 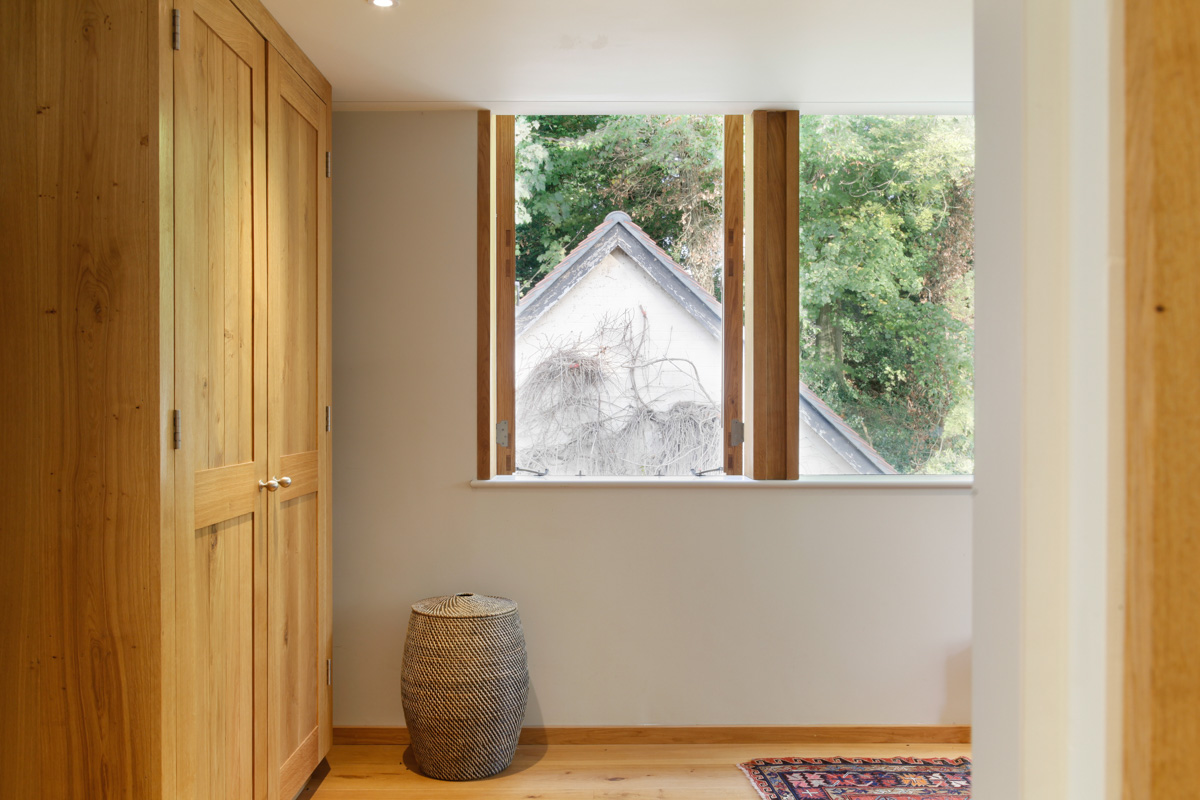 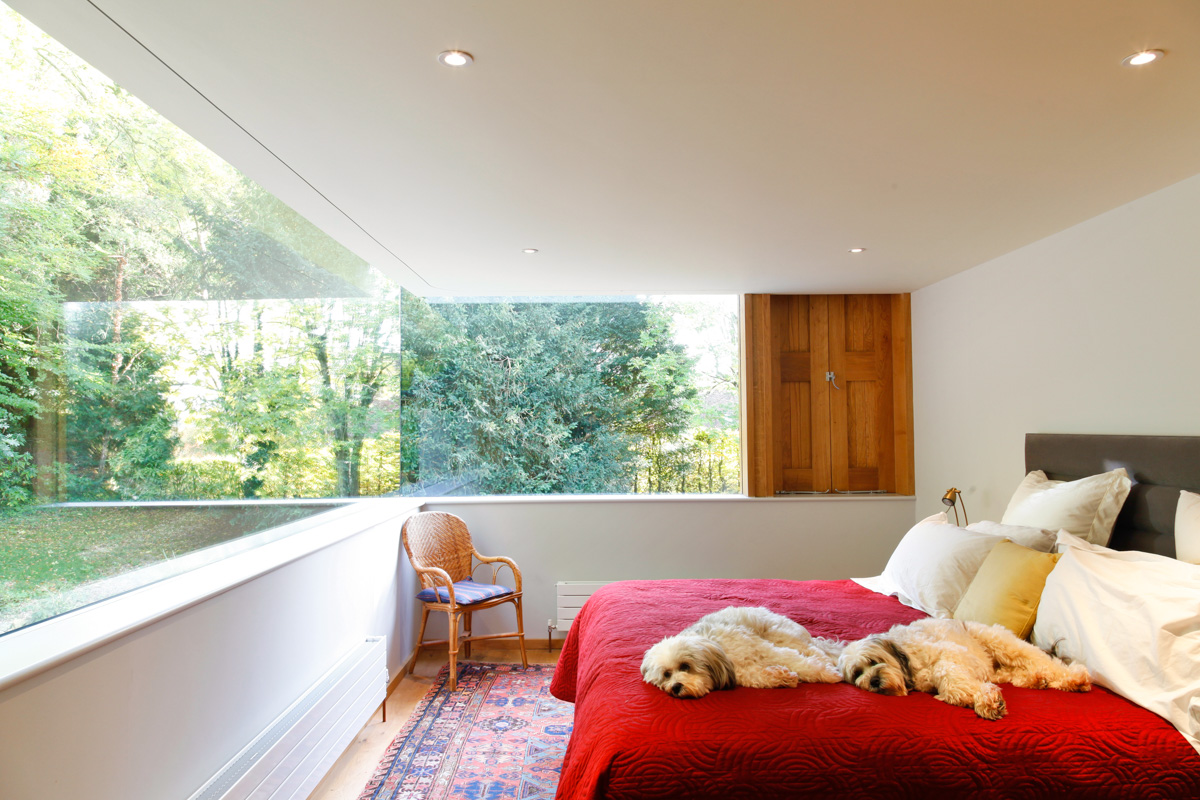 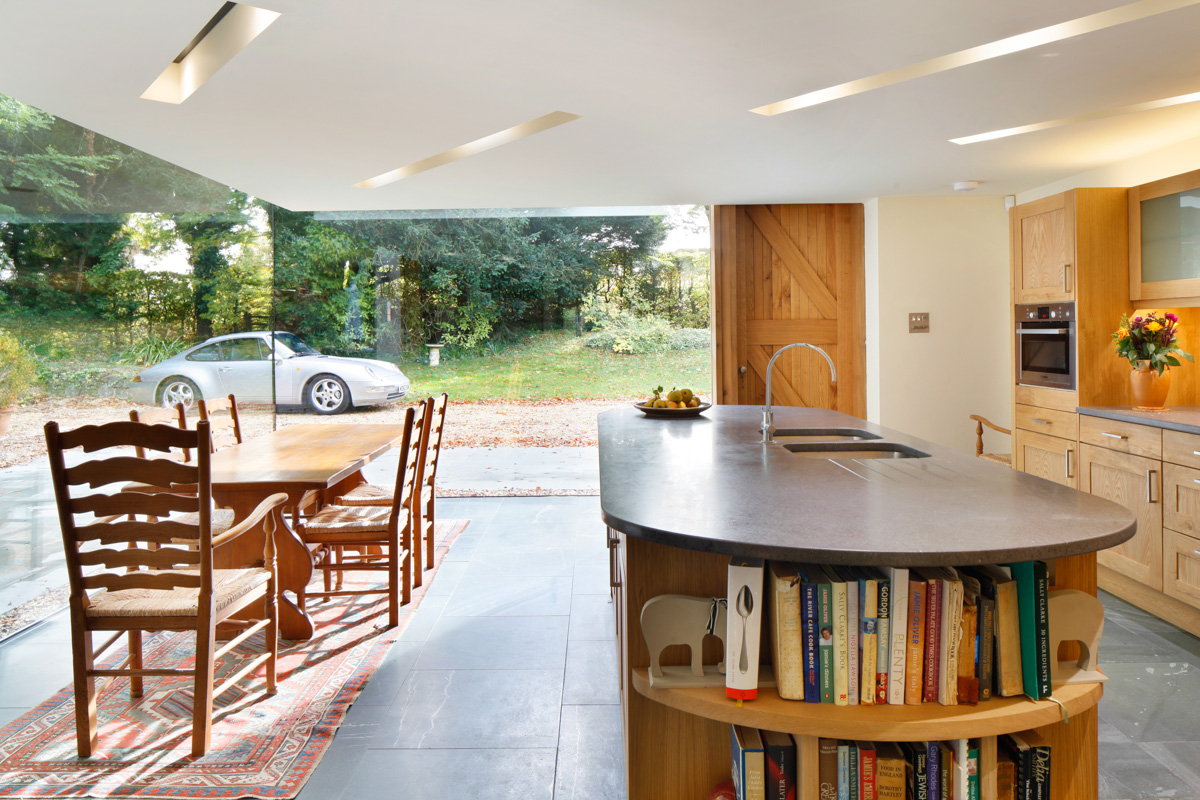 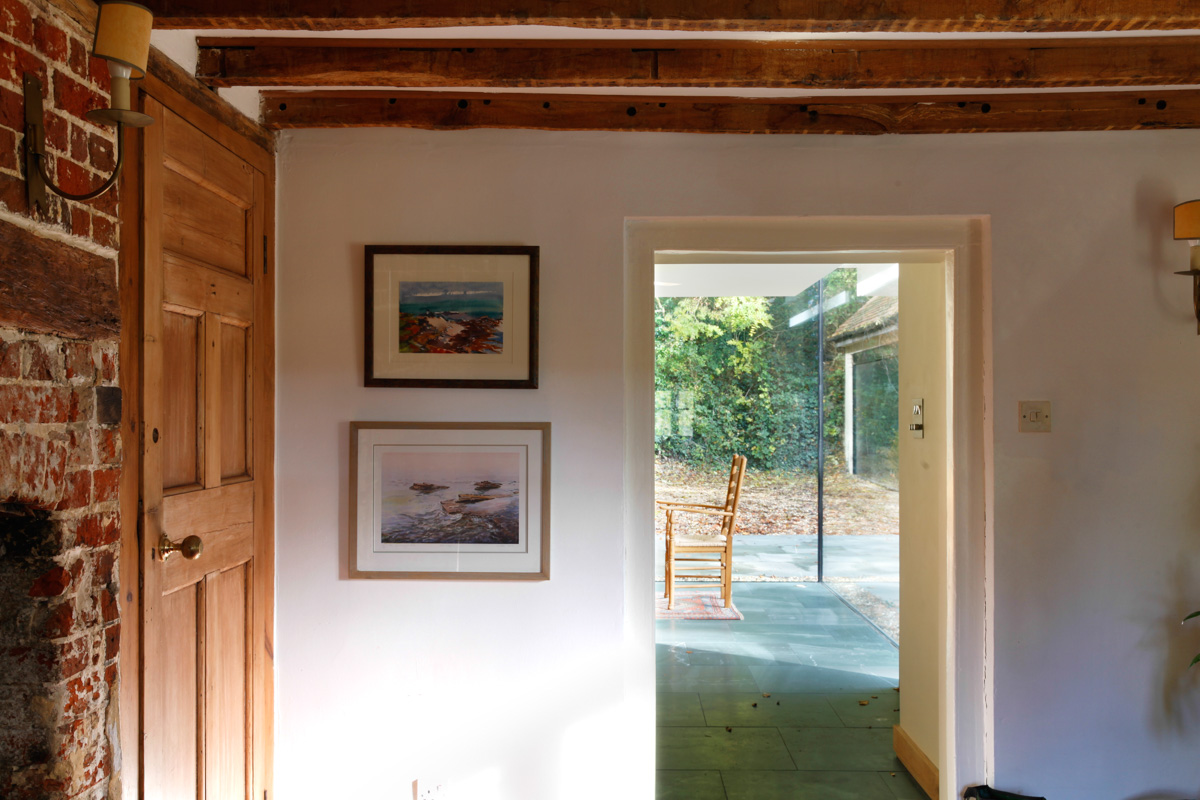 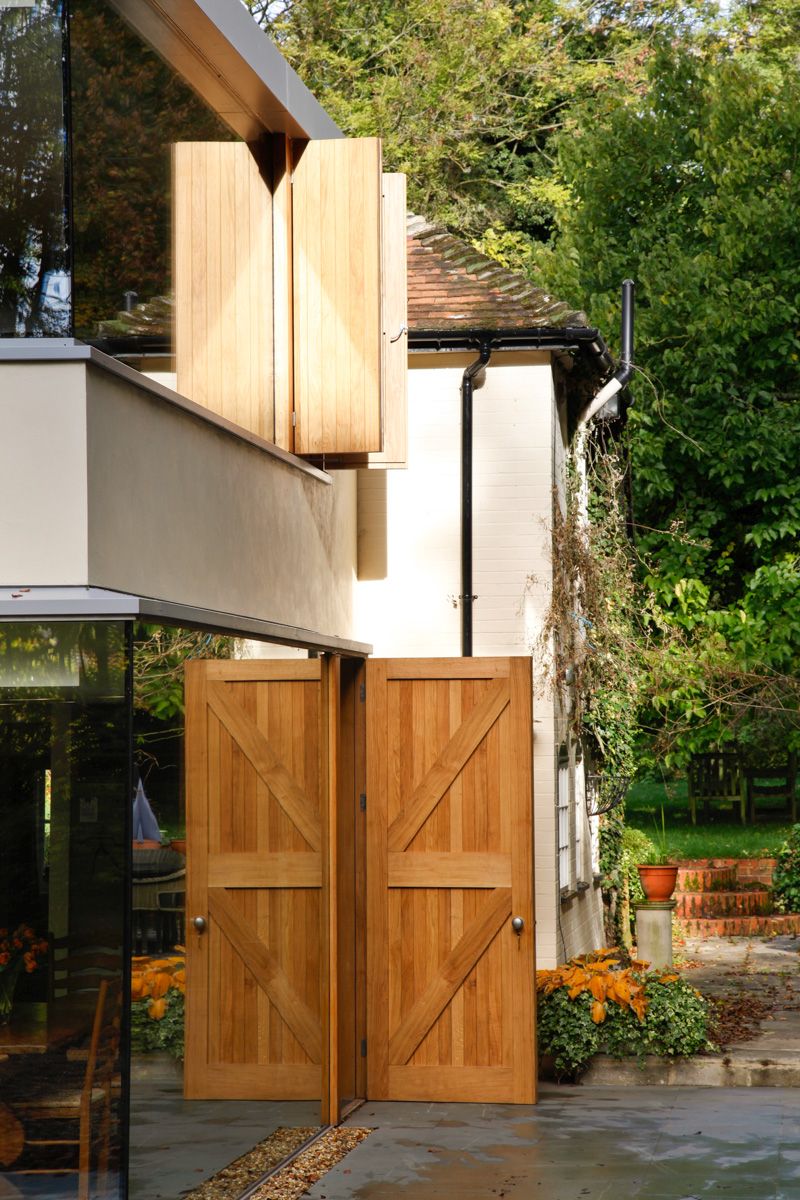 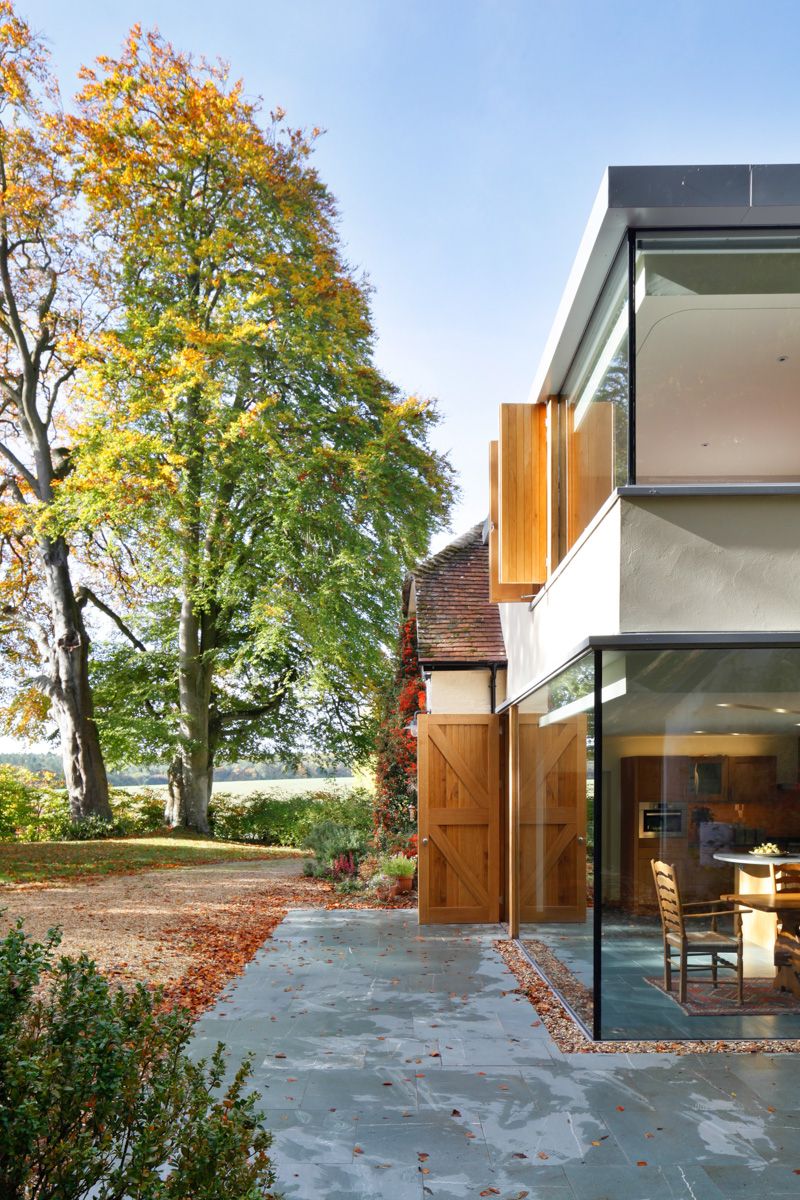 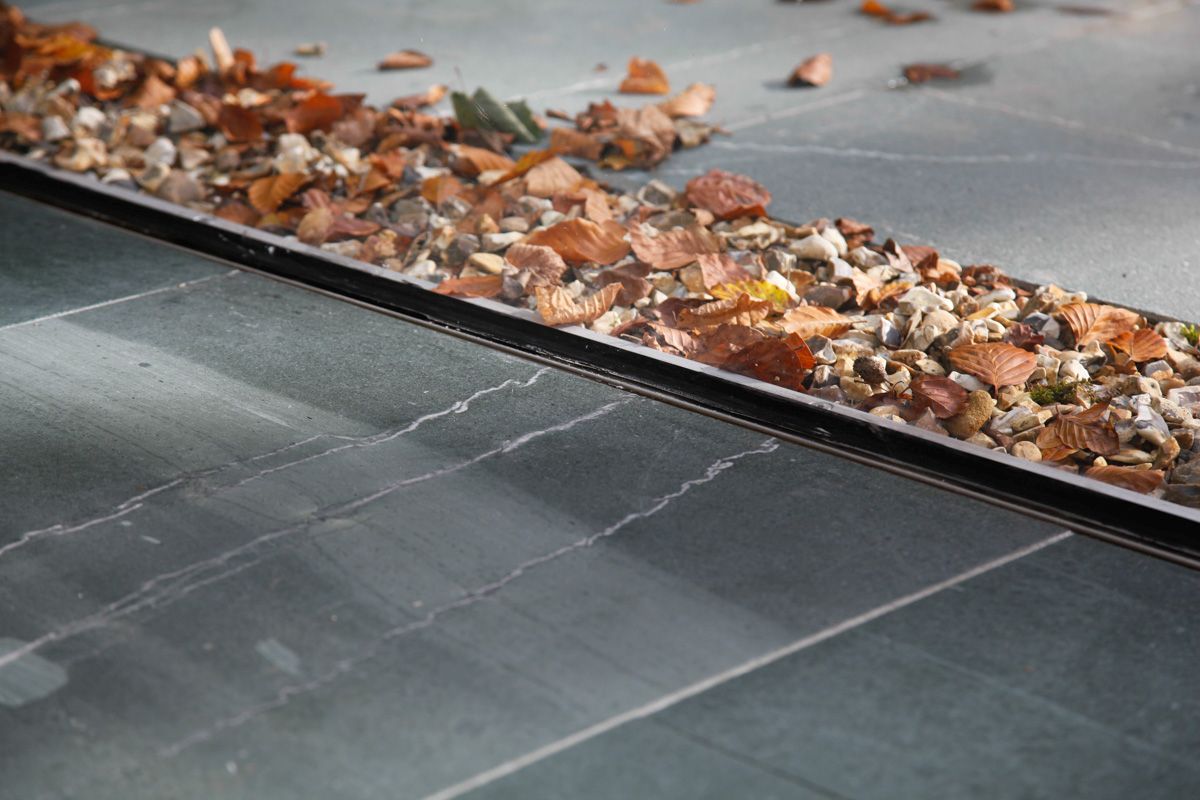 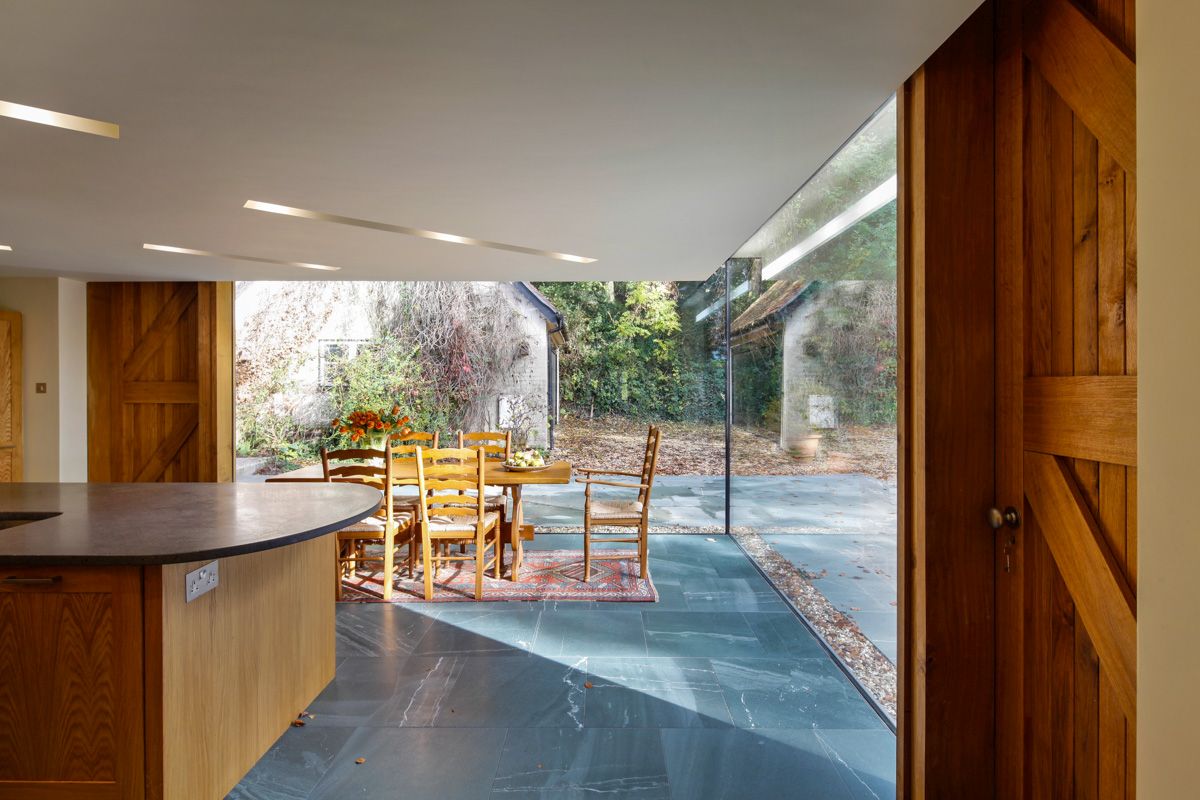 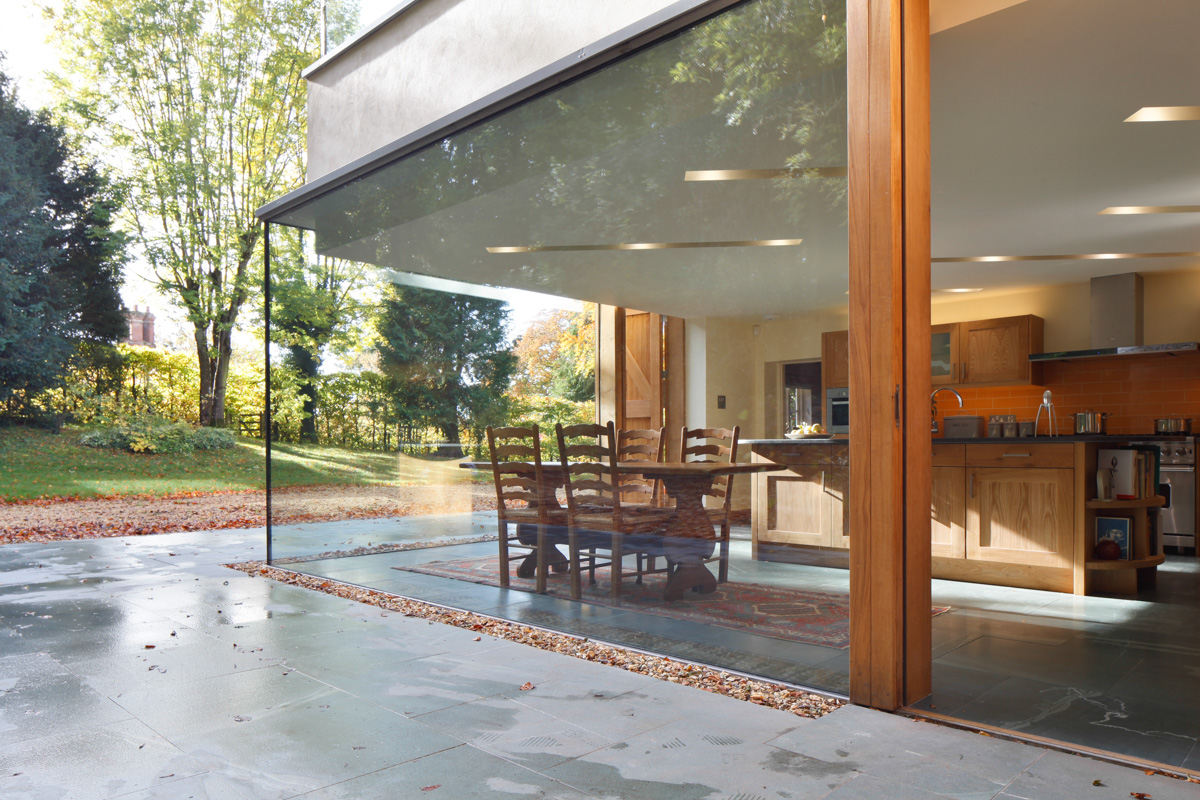 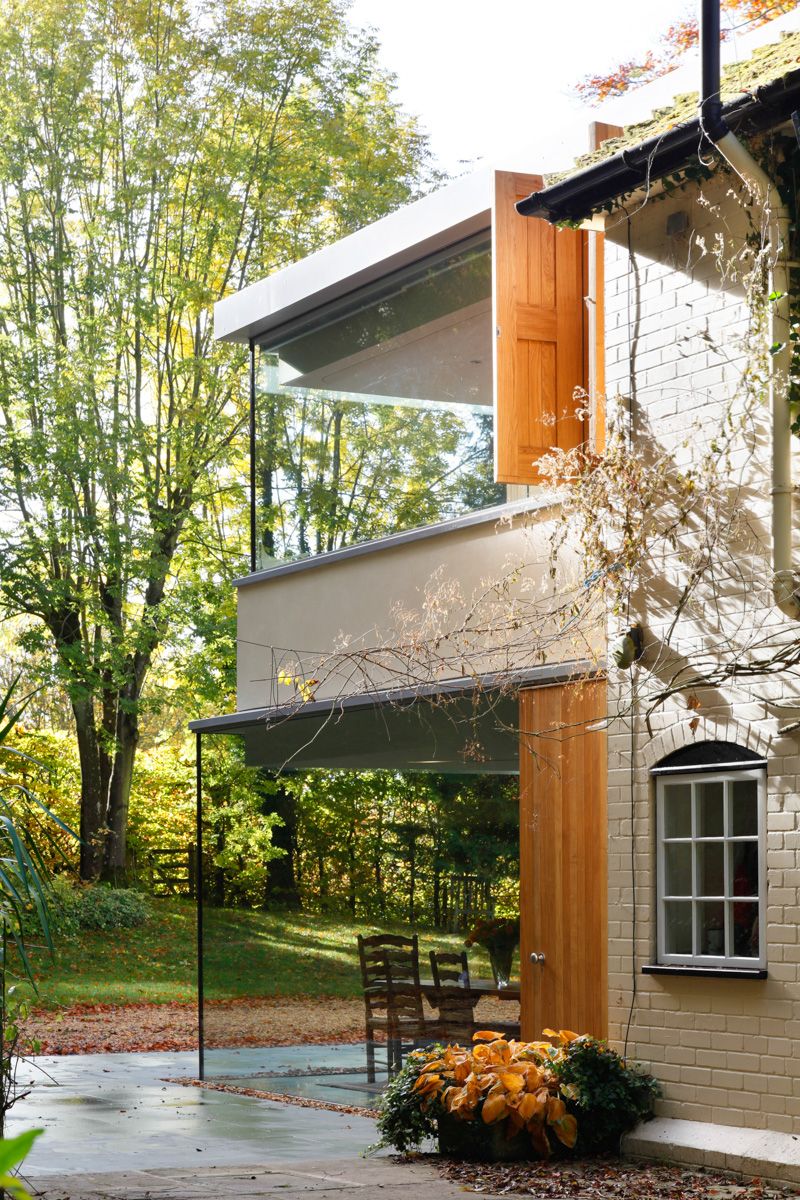 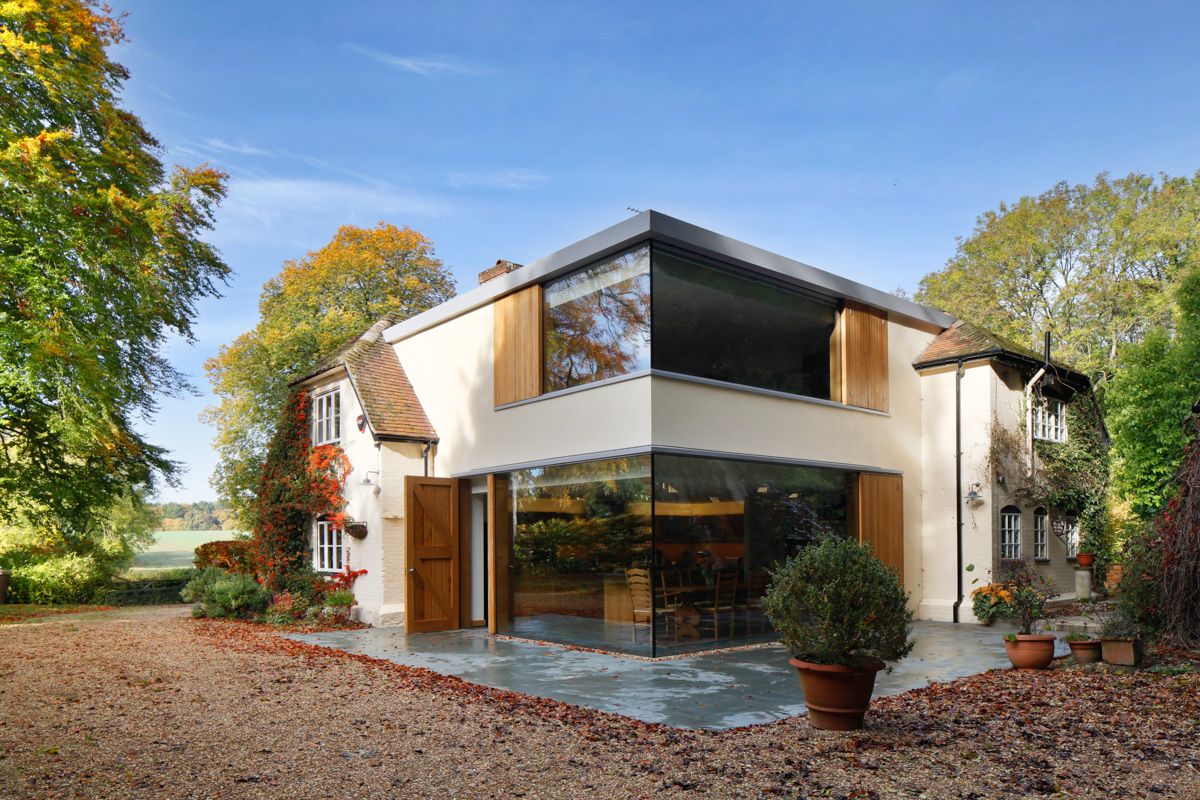 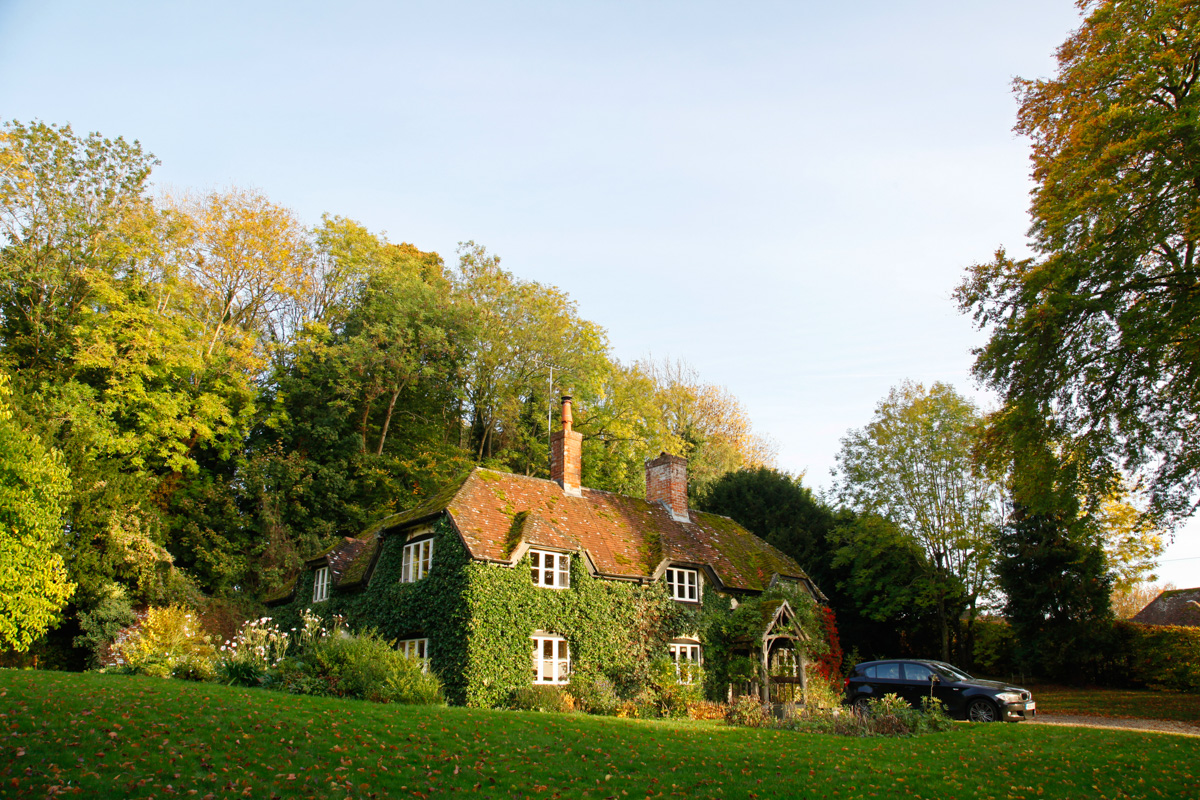 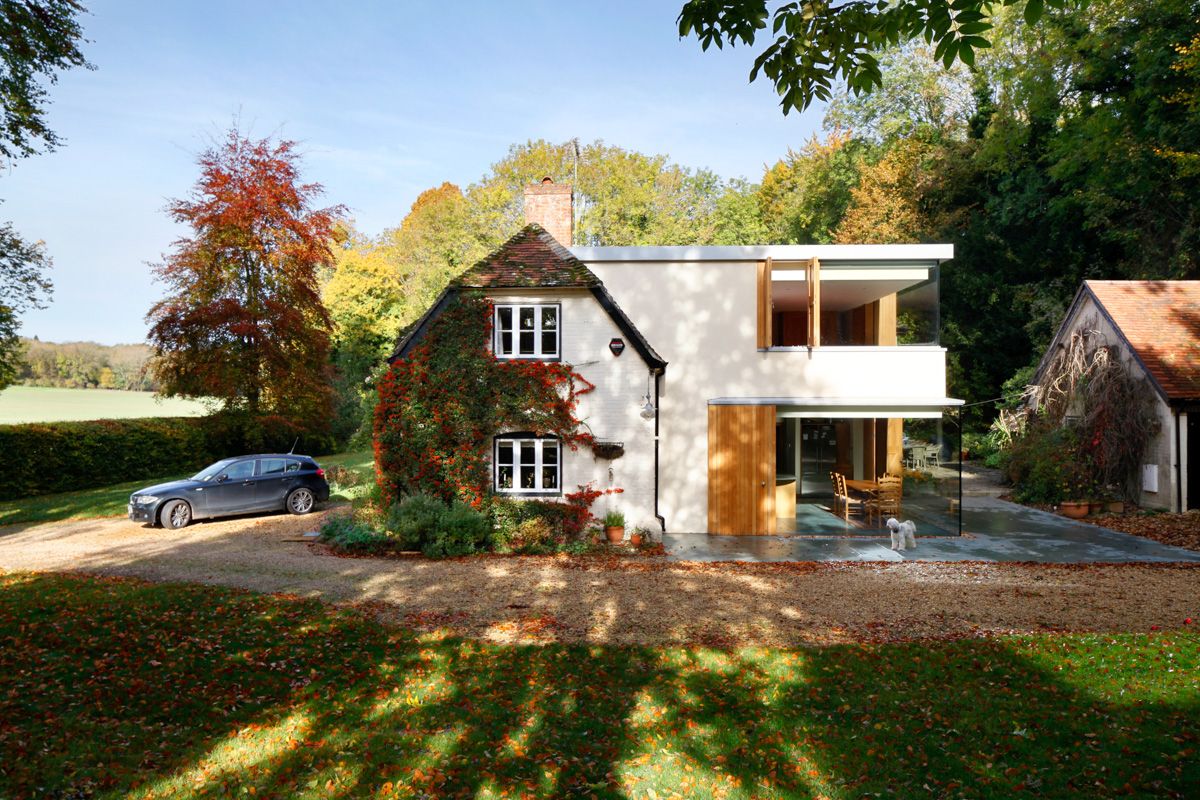 From the meandering leafy country lane, a casual glance over the hedgerows would not reveal anything unusual about this cozy cottage. Set back from the road behind green lawns and native flowers, it’s red roof tiles gather moss and traditional wooden framed windows nestle behind dense ivy, with no clue as to what lies behind.

The surprise element makes this new architectural addition more impactful. As you round the corner of the gravel drive, the house becomes suddenly transparent thanks to an ultra modern glass walled extension which makes an open plan kitchen under a floating cantilevered ceiling the centrepiece of the home.

The beautiful woodland setting filters dappled light onto the stone work surface and table of the kitchen dining area. TV and Film producers Elaine Sperber and Nick Manzey wanted to maximise views out to the garden and trees.

The couple were familiar with Stephen Marshall Architects’ award winning gallery and artist’s house designs local sculpture park Roche Court and were keen to employ a similar approach to materials and detailing to extend living space and natural lighting at their Hampshire cottage.

The floor connects the inside and outside space and contrasts with the painted brick and slate of the victorian cottage. New views have opened up the cosy wooden beamed sitting rooms with views through to the light filled kitchen area.

The architect’s approach on plan was to ‘complete’ the square.

As with many projects completed in a historical context, Stephen Marshall Architects intention was that the extension should be clearly different from the original building allowing both to be read independently.

A new master bedroom and en-suite bathroom were created on the upper level, much to the delight of the couple’s pet dogs, seen regularly lounging on top of the bed. Furniture and floorings tie in with the oak used in the window shutters. The structure is innovative and required substantial amounts of computer modelling to create the open cantilevered corner.

“A projecting beam had to be pre-cambered allowing it to sink when the weight of the upper level was applied to it.”

Beautiful reflections in the glass walls change throughout the seasons creating a sense of harmony with the surroundings. Inside lighting is kept subtle thanks to recessed ceiling lights that don’t interrupt the natural green views.

As dusk falls, the warm glow invites a retreat into the shelter of the cantilever.

Construction was carried out by Martin Price of Salisbury and took 9 months with some delays to allow for rare wildlife and bat surveys. The 70m2 extension with a total budget of £250k was completed in February 2015.