Buddha is a very strong cultural and religious symbol and it’s something that’s part of everyone’s general culture. So it’s not unusual to see Buddha inspired item and even furniture pieces. However, the next furniture collection is a little weird. It’s beautiful and very modern, but it’s still strange at least the first time you see it. 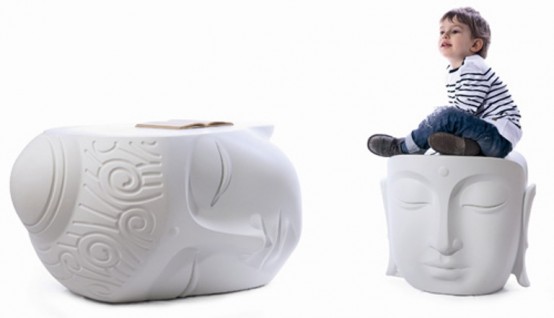 The collection is formed from a table and a pouf. They are both inspired by the legendary Buddha. Actually, the only part of Buddha that these pieces of furniture are using is its head. It seems a little cruel but I guess the designers didn’t feel the time. The pouf is actually a little more acceptable because at least the head is sitting vertically like it should be. Also, it’s funny to see someone seat on Buddha’s head. However, I can’t say the same thing about the table. Not only that the Buddha head is placed horizontally, which shouldn’t be a big problem, but a piece of it has been cut off in order to make the table flat. To me this is an insult not only to the cultural symbol but also aesthetically because it doesn’t look good at all.