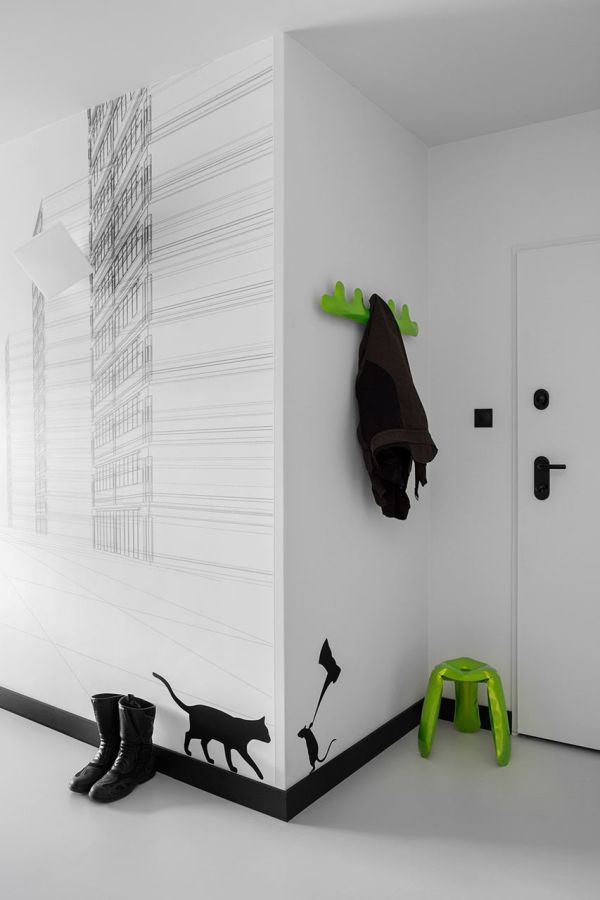 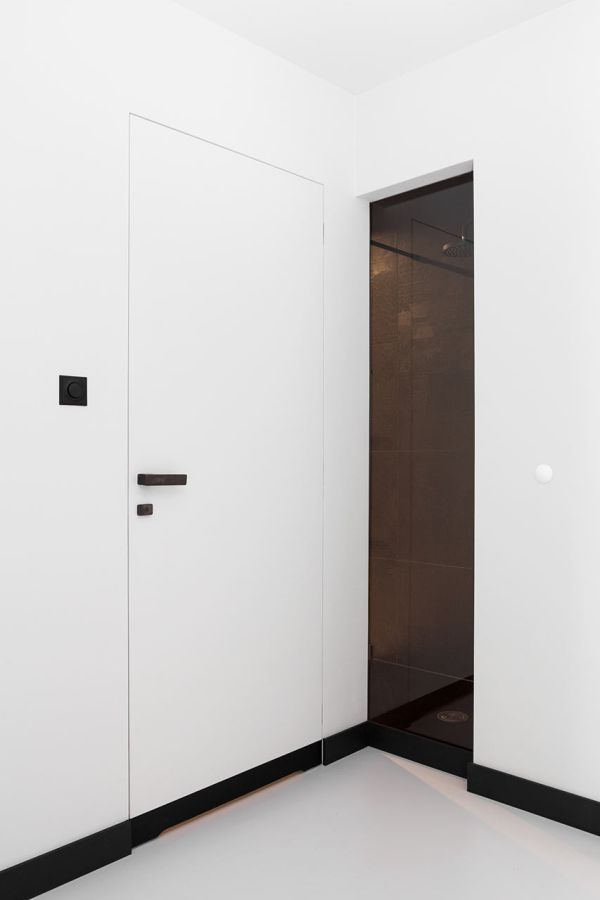 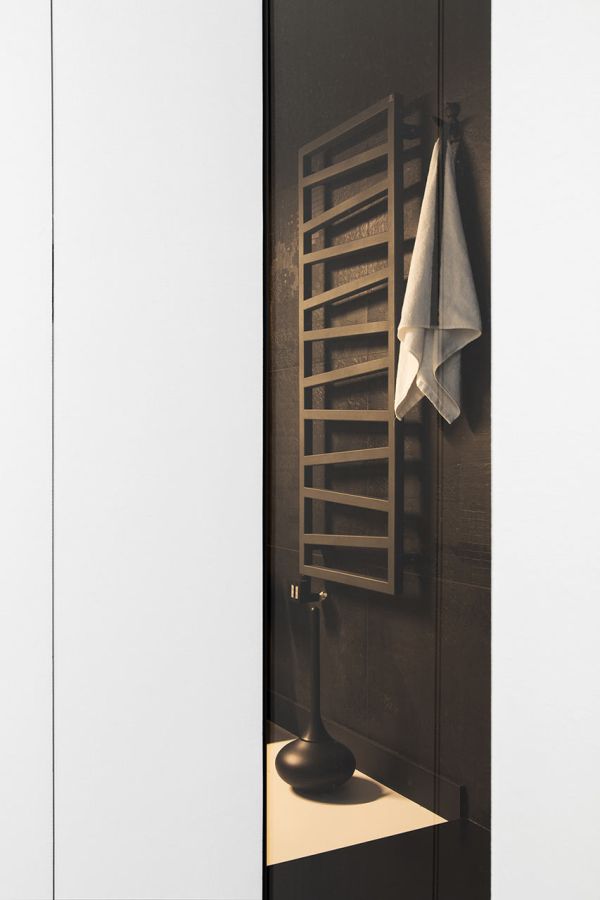 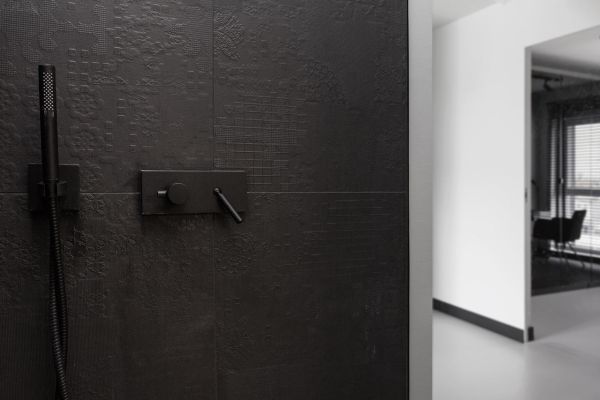 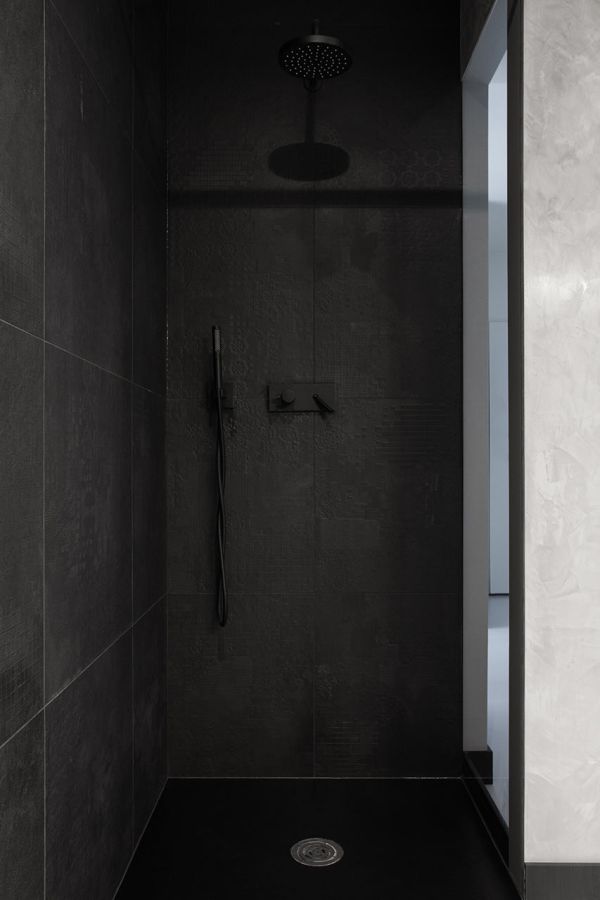 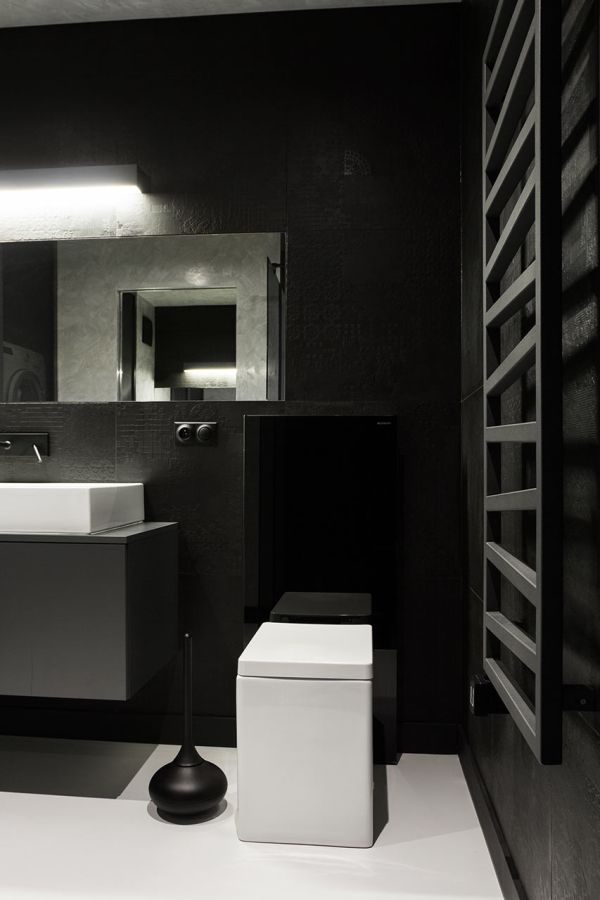 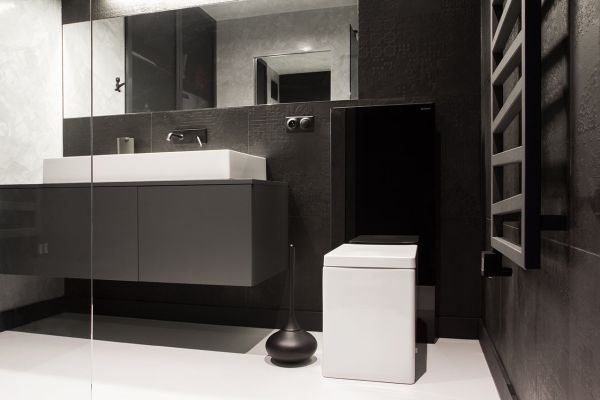 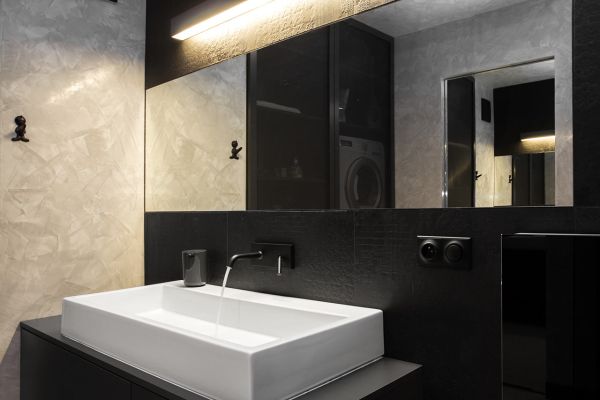 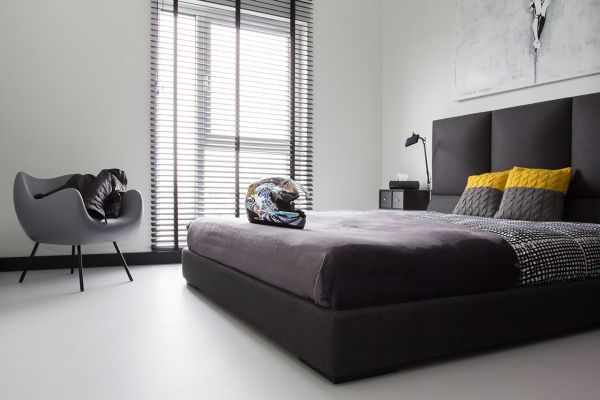 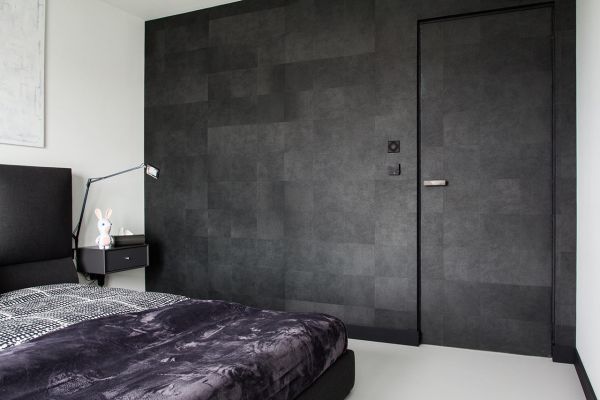 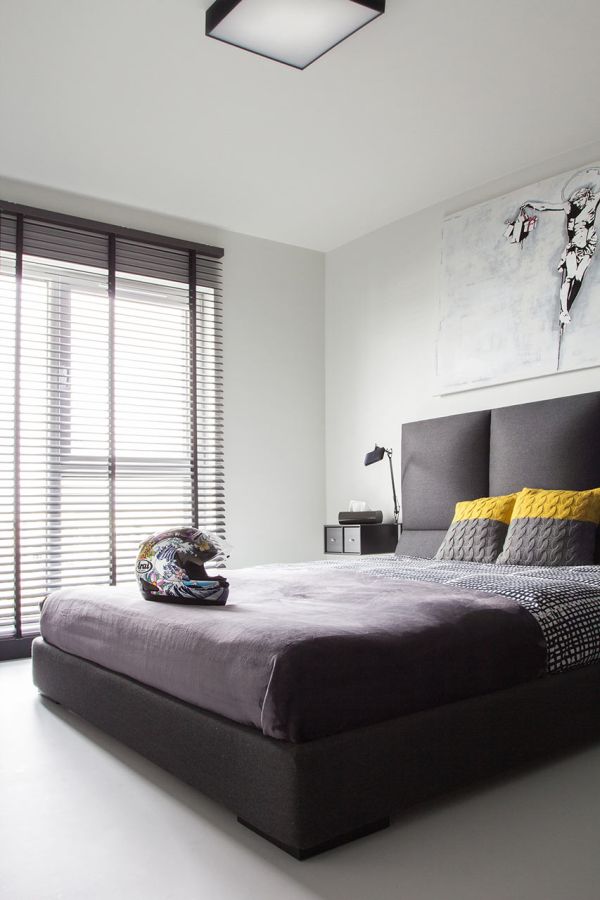 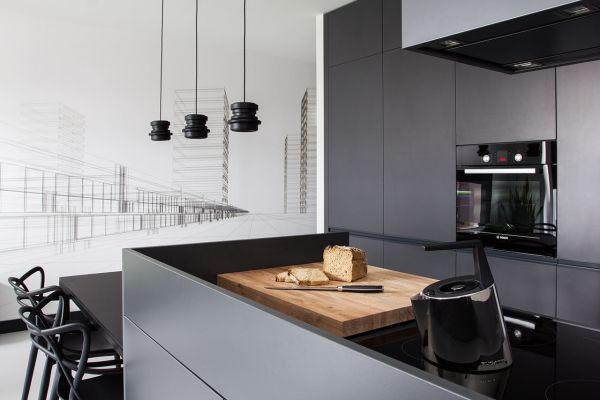 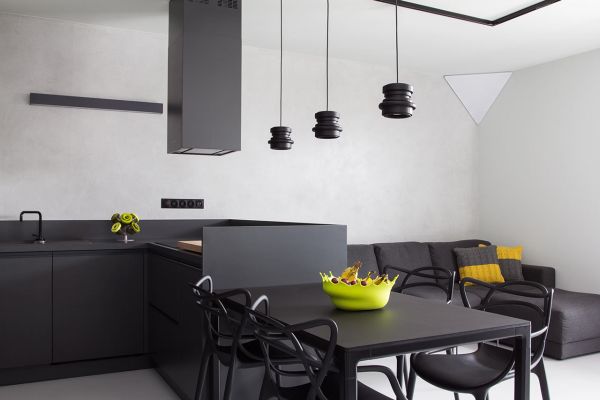 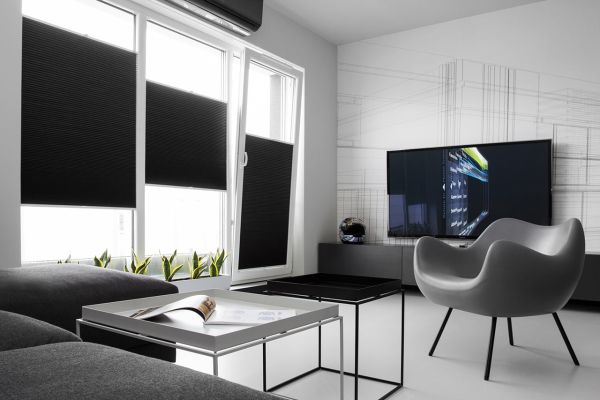 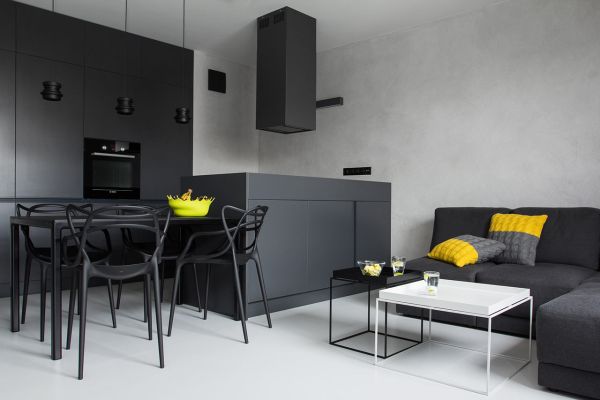 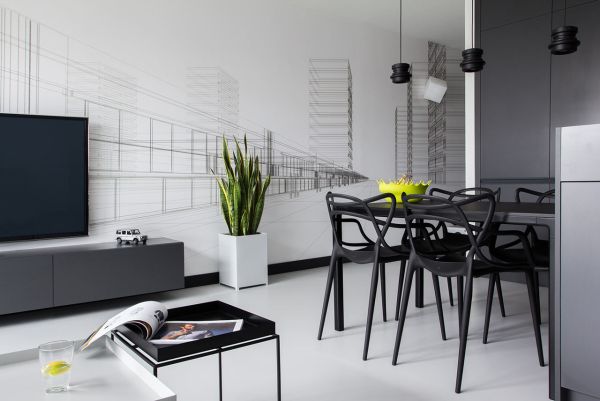 At the heart of any décor are the same simple elements and colors which, when combined, result in unique and spectacular designs. Black and white and the two most basic and simple colors but this doesn’t mean that they can’t create a stunning and interesting décor. It’s exactly what this apartment in Poland shows us, designed by Kasia Orwat.

This apartment has a very limited color palette. Black and white take the center stage but the occasional yellow and green details take it over the top.

But even though the contrasts are strong, pure white and black elements are quite rare here. If you look closer, it’s actually a dark shade of gray which is the main color in this case.

The custom wallpaper in the living area adds depth to the space and also empahsizes the simplicity of the décor. The shapes and lines are all very clear but also diverse.

The apartment has an open floor plan but, because of the cohesiveness of the colors and the simplicity of the lines, the transition between the space and difficult to detect. The dining table separates the kitchen from the lounge area and it forms a distinct area by itself.The black chairs are from Kartell.

The kitchen is dark and features black amenities. It’s a custom-designed space with a highly modern look. It contrasts with the rest of the space but it also fits in beautifully.

Similar colors were also used in the bedroom. Yellow was chosen as an accent color in here as well. It cheers up the rooms and prevents it from becoming gloomy and dark. The gray gives it a very cozy and comfortable look.

Another element which makes this room feel warm and cozy despite the lack of colors such as brown or red and despite the fact that there’s no natural wood displayed is the dark textures wallpaper.

The light gray floor complements the décor and adds a warm touch to the room, especially with the underfloor heating system present.For the reading corner the armchair RM58 by Vzor  fit perfectly the entire decor.

Texture plays an important role in the interior design of this particular apartment. Because the colors are so few and simple, other ways to create contrasts had to be found. The textured black tiles in the bathroom complement the stucco walls.

The limited color palette works great in here because the space is limited. The focus is on the clean lines and the simplified décor makes the room feel bigger.

Lighting also plays an important role. It makes the space feel inviting and intimate and it also allows the different textures and finishes to stand out more.

I love the black tiles used in the shower. They have a very beautiful texture and they’re a perfect choice for this space.

Light comes into the bathroom from the glass panel which separates it from the hallway.

Even though the bathroom has a very simple décor, it doesn’t lack eye-catching details. The asymmetrical lines of this piece manage to make it stand out and, when you think about it, this wouldn’t have happened if the décor wasn’t so pure and simple.

The door almost completely disappears into the wall. This only emphasizes the minimalism of the interior design throughout. Also, the black accents are strategically chosen.

Don’t be fooled by the minimalism. The apartment is not nearly as austere and sober as it seems. Just take a look at these fun details.