When I was little I spent a lot of time in the country side at my grand parents. Although at that time I was not enchanted by the tasks given by my grandparents, now I remember the beautiful and funny parts of those moments and the fact that I learned a lot of new things that proved very useful in time. Here everything was natural and rustic and hardly could you notice a trace of modern technology. Food was always fresh and warm, the air could not be compared with that from the city and people were characterized by a specific naivety that is usually met at the people from the country side.

I cannot forget the old furniture that it needed some repairing and reconditioning. This DIY project reminded me of all these facts. It refers to a miniature dresser bought by couple which got a new look as it was just the rough wood. The outdated wood stain was removed with a coarse grained sand paper and a small power sander. 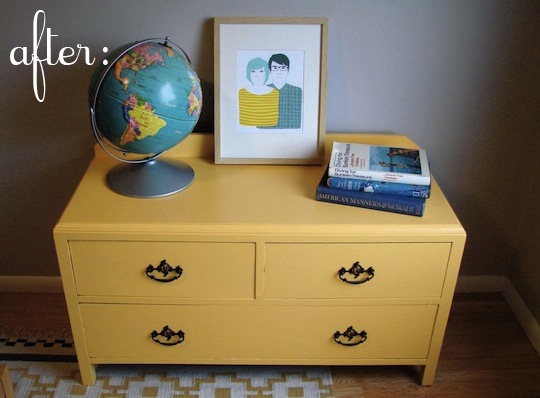 In order to smooth it out, they also used a finer sand paper and then used a water-based primer and coated the dresser with two thin coats. For a better result the primer was sanded too. Then four or five thin layers of paint were applied and it was used a small foam roller for a smoother coverage. The couple was satisfied with the result and ready to move the dresser in their room.{found on apartmentteraphy}