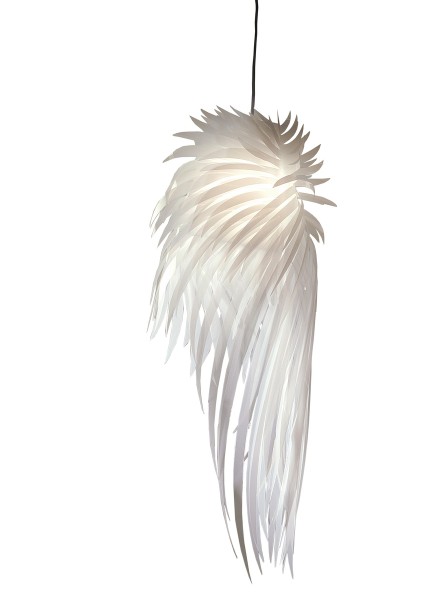 We, humans, do not have wings, so we cannot fly by ourselves. However, people have always dreamed about flying and wanted this so bad that they found ways and means of doing it by using helicopters, planes and all the other similar devices. Well this dream of flying became possible only in the recent past and in the Ancient world people had to settle with unsuccessful attempts and legends – like the one of Icarus. Icarus is said to have built wings of wax and feathers and when he came near the sun, the wax melted and he fell in the sea and died. Artecnica Icarus Pendant Lamp is inspired by this legend and the result is spectacular.

This pendant lamp is designed by Tord Boontje for Artenica and it looks great. It has an incredible design which makes it look like a real bird wing, but it actually is a multi-layered extruded polyester pendant light. The light of the 60 watt light bulb is filtered by the “bird wing”, becoming very warm and welcoming, almost like the spring light that warms birds’ babies in their nests. It does come with a conical safety protector so that the lamp shade will not get burned if it touches the light bulb directly. The item is a spectacular sight and it can be used in your home or maybe in a hotel room. It can be purchased for $105.