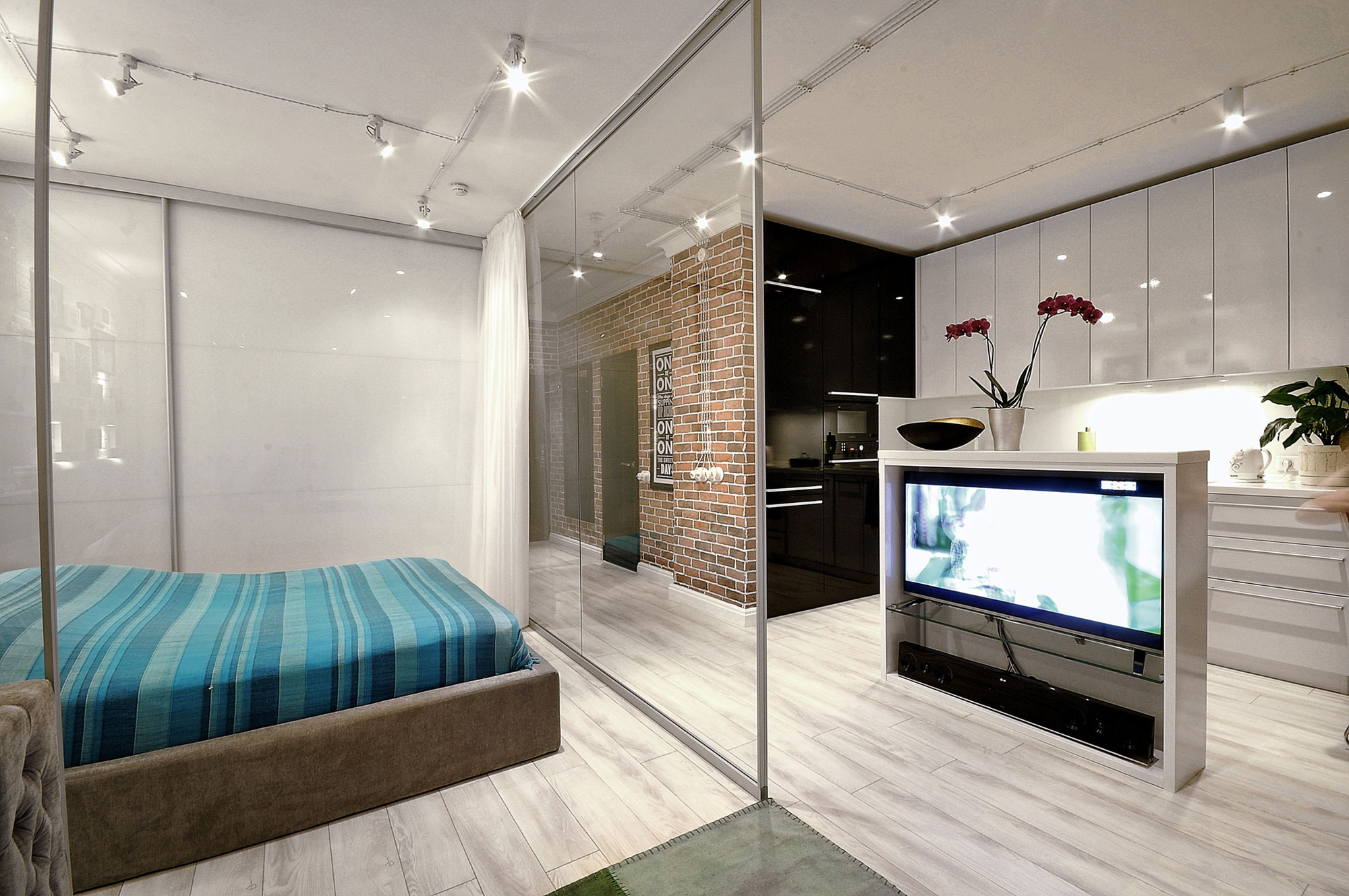 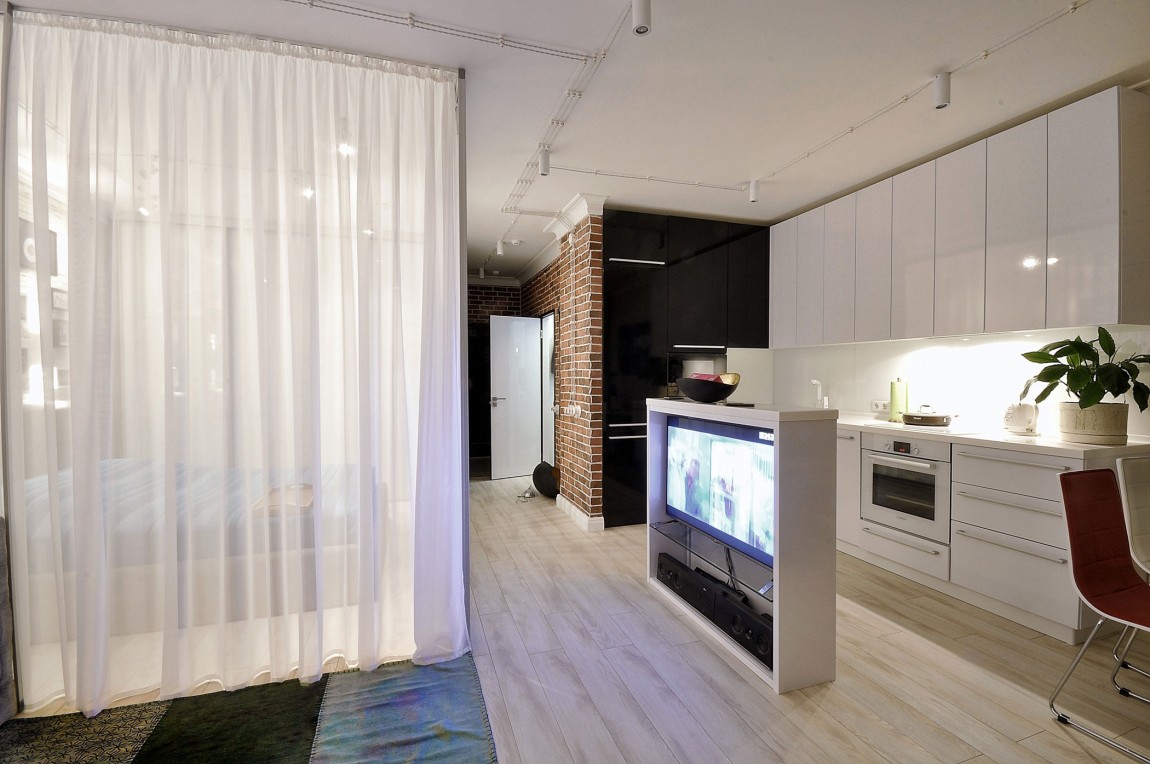 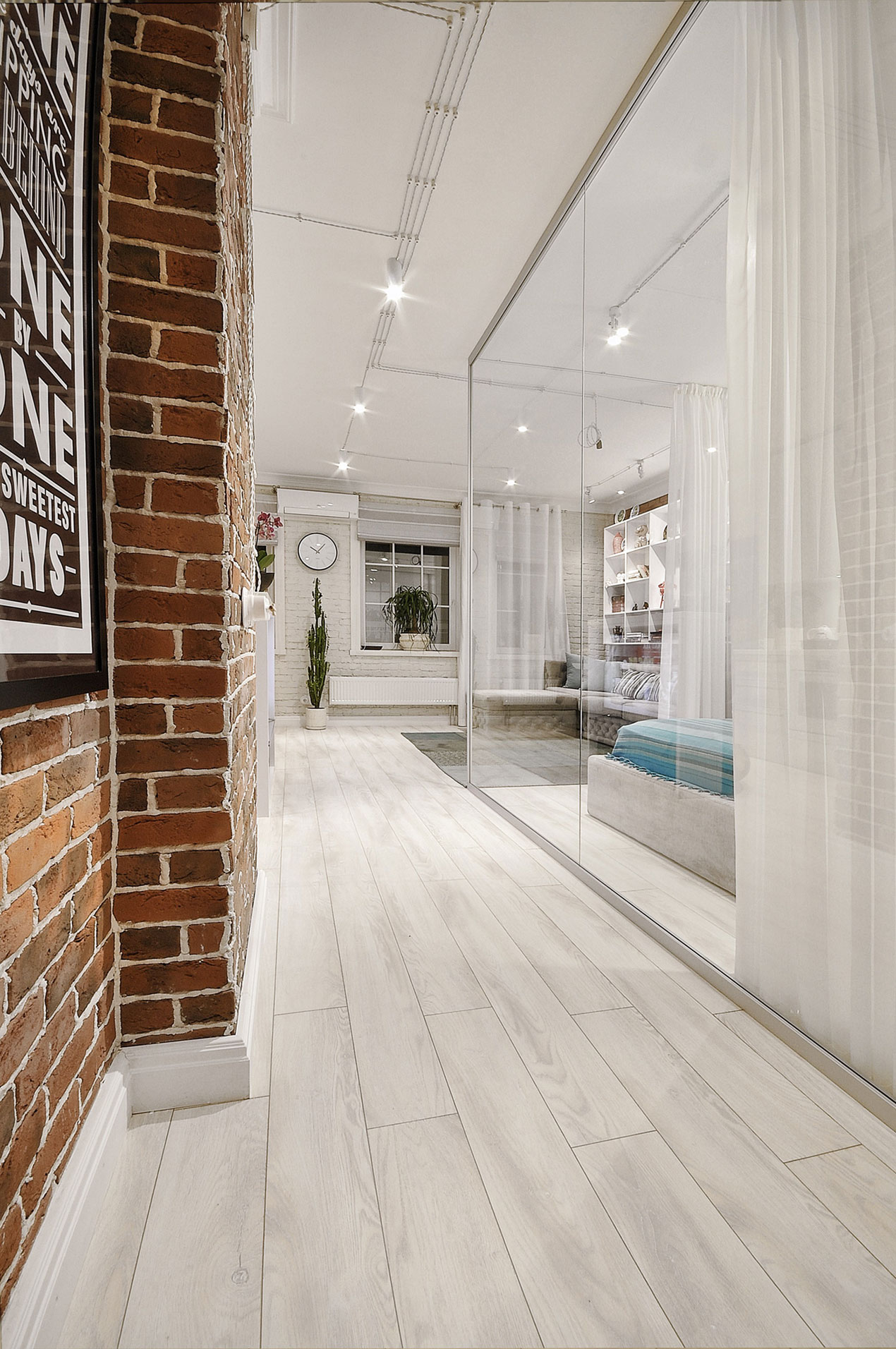 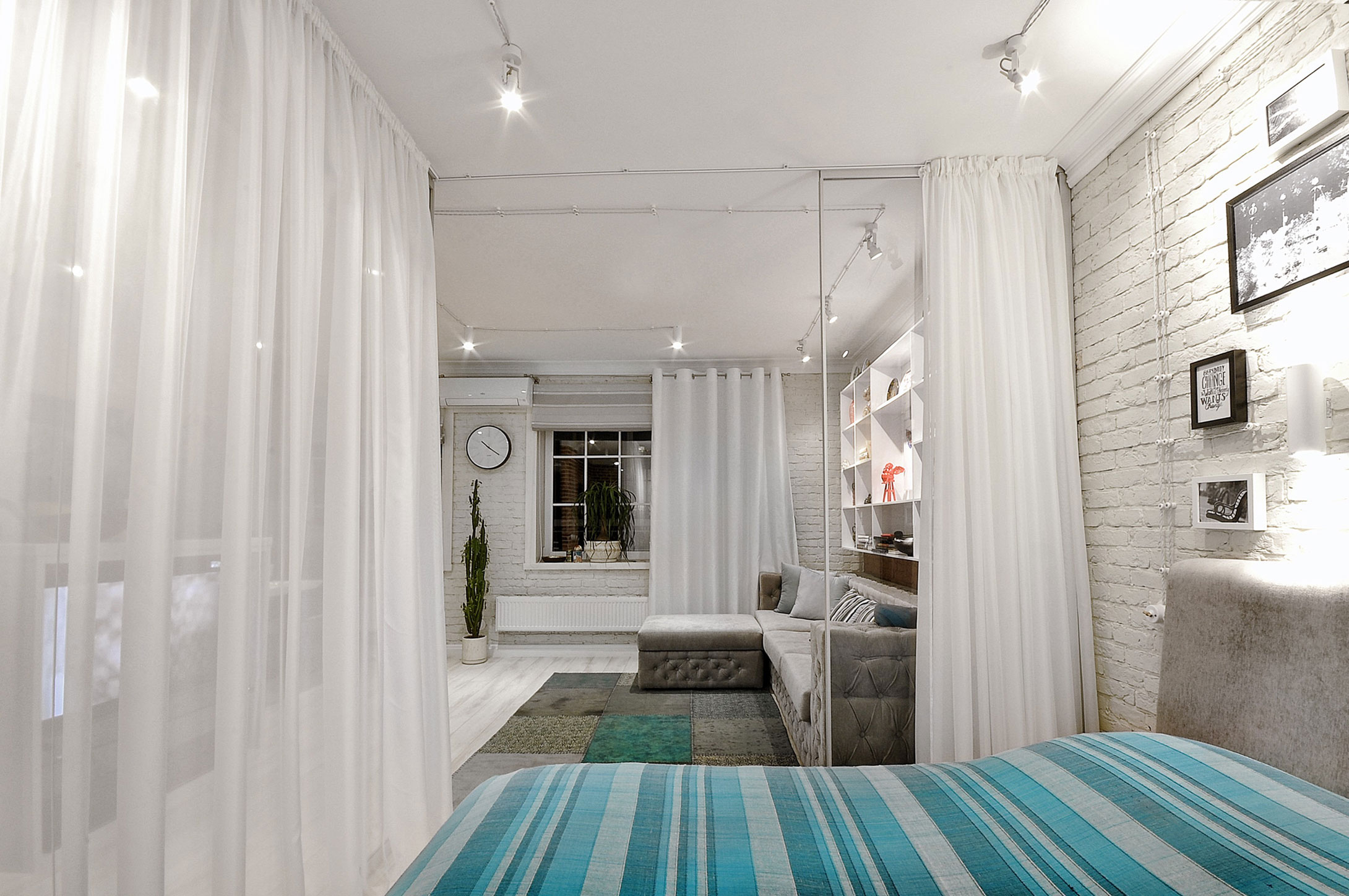 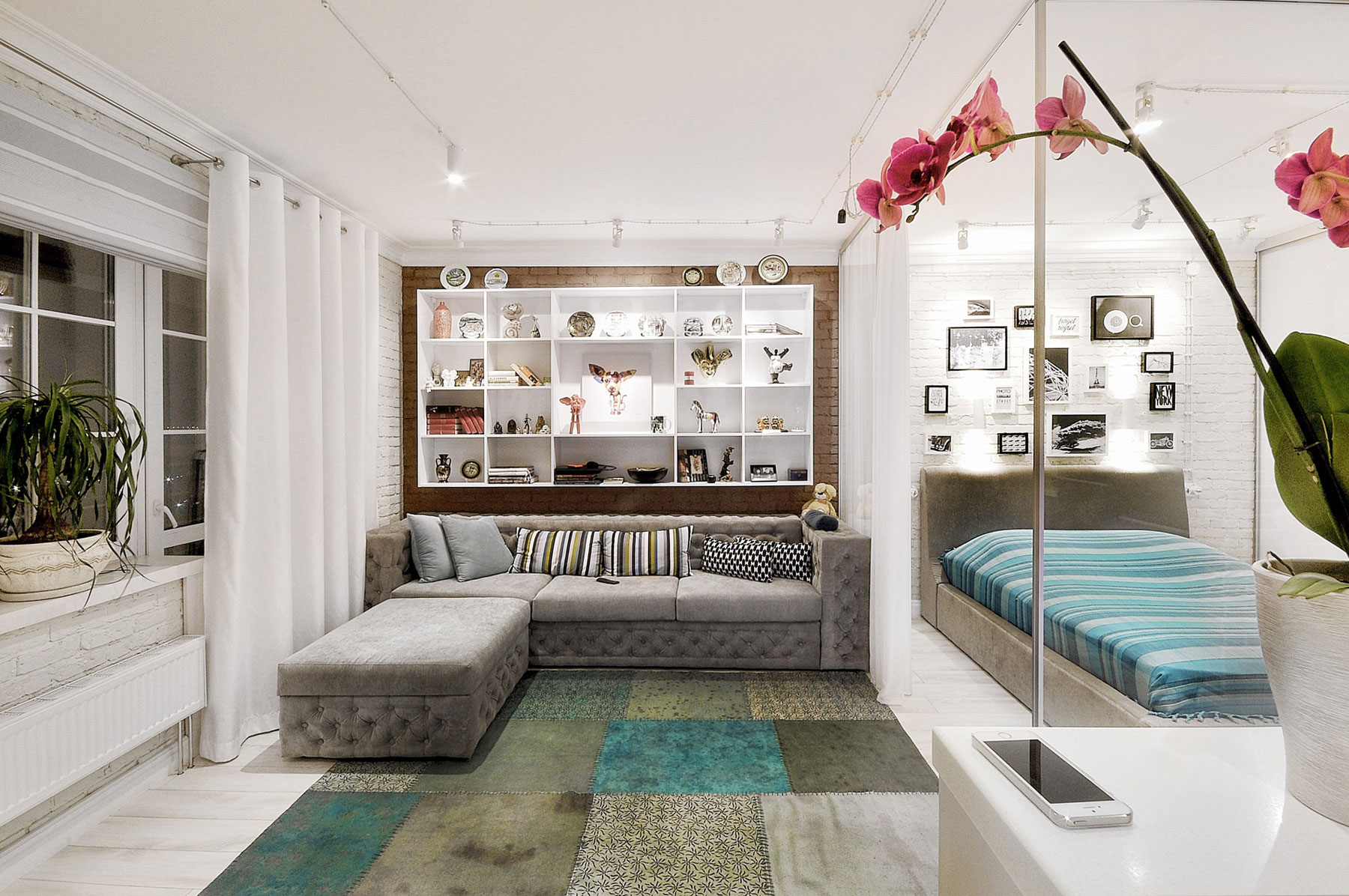 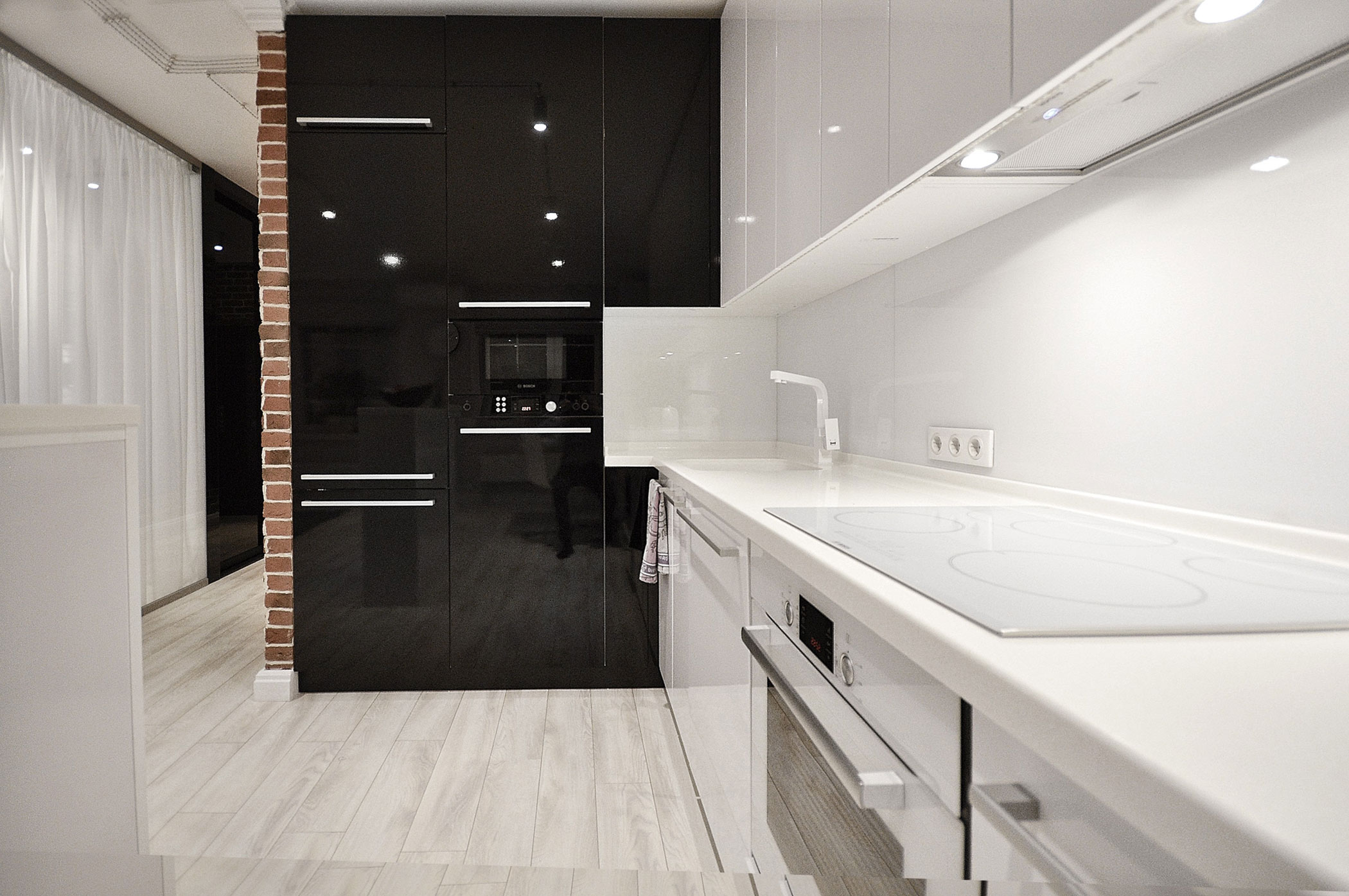 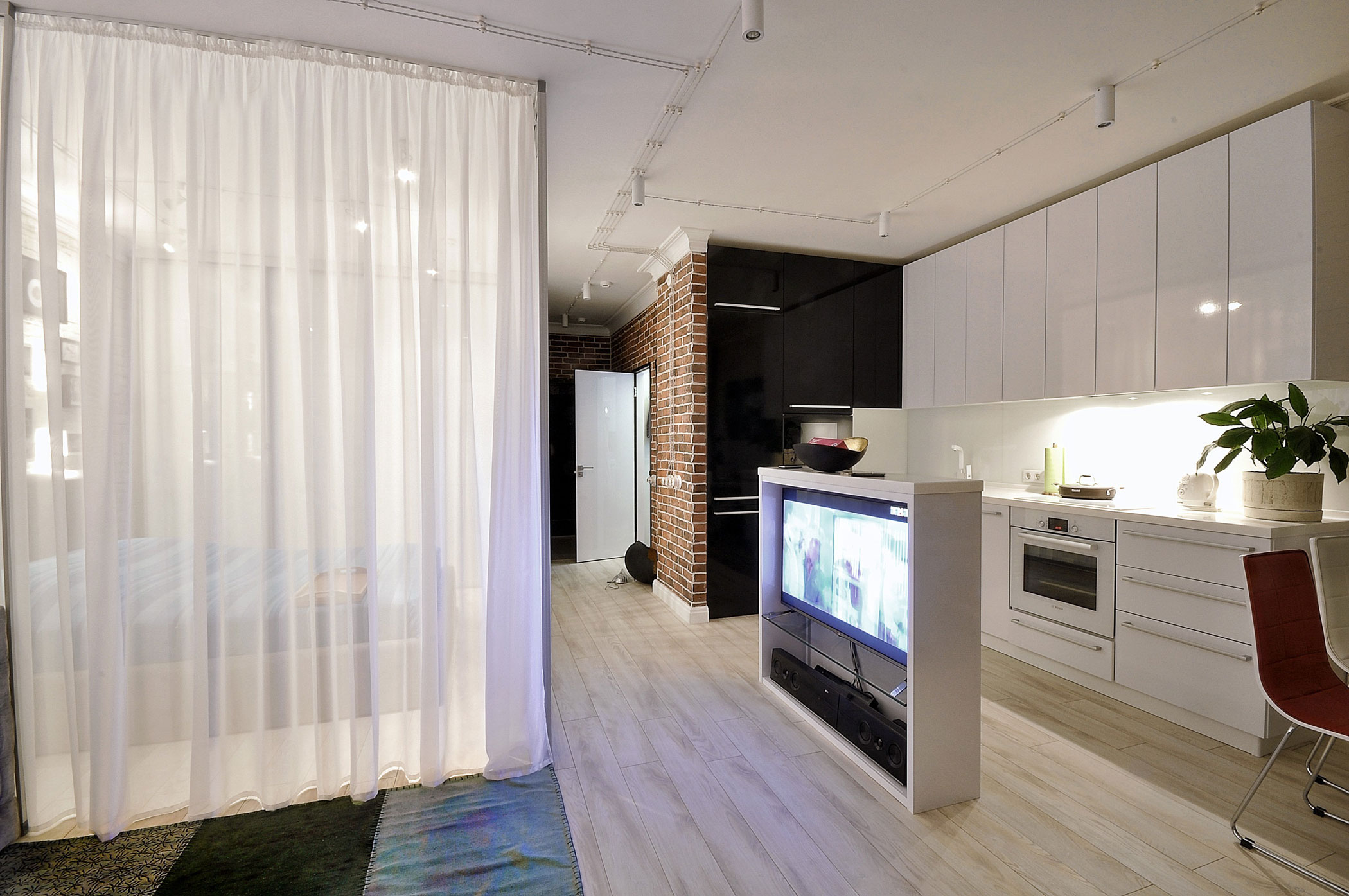 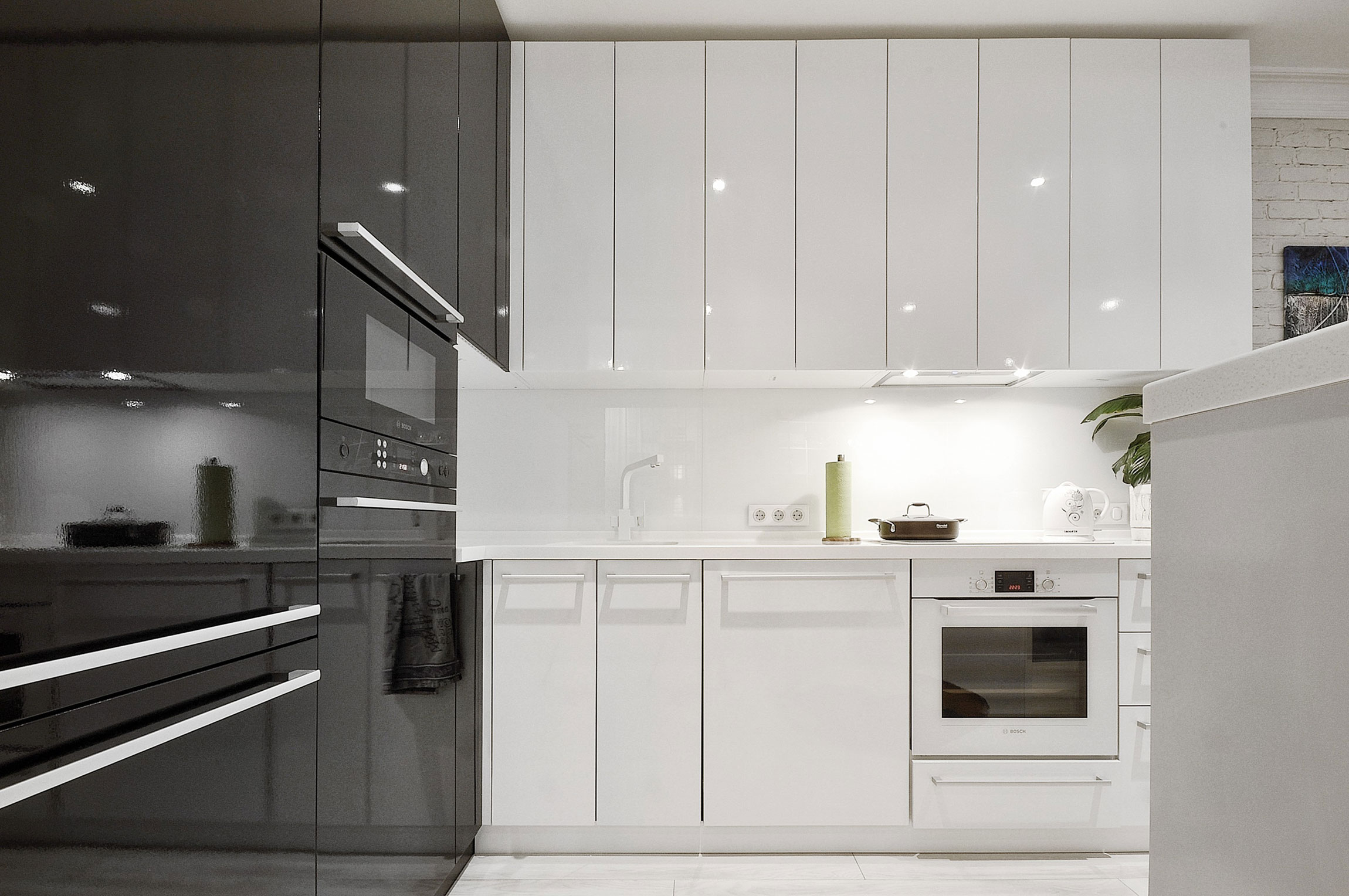 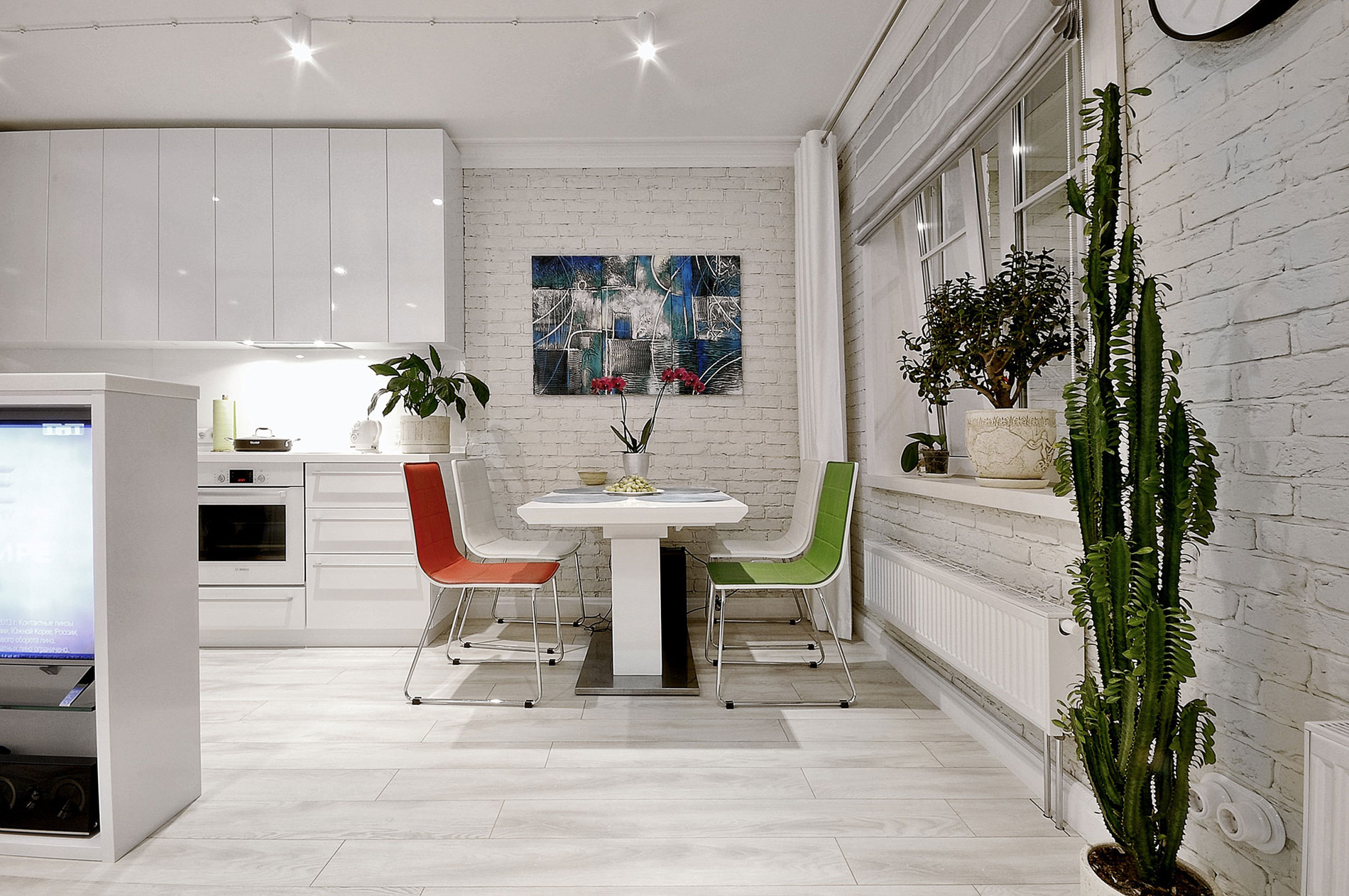 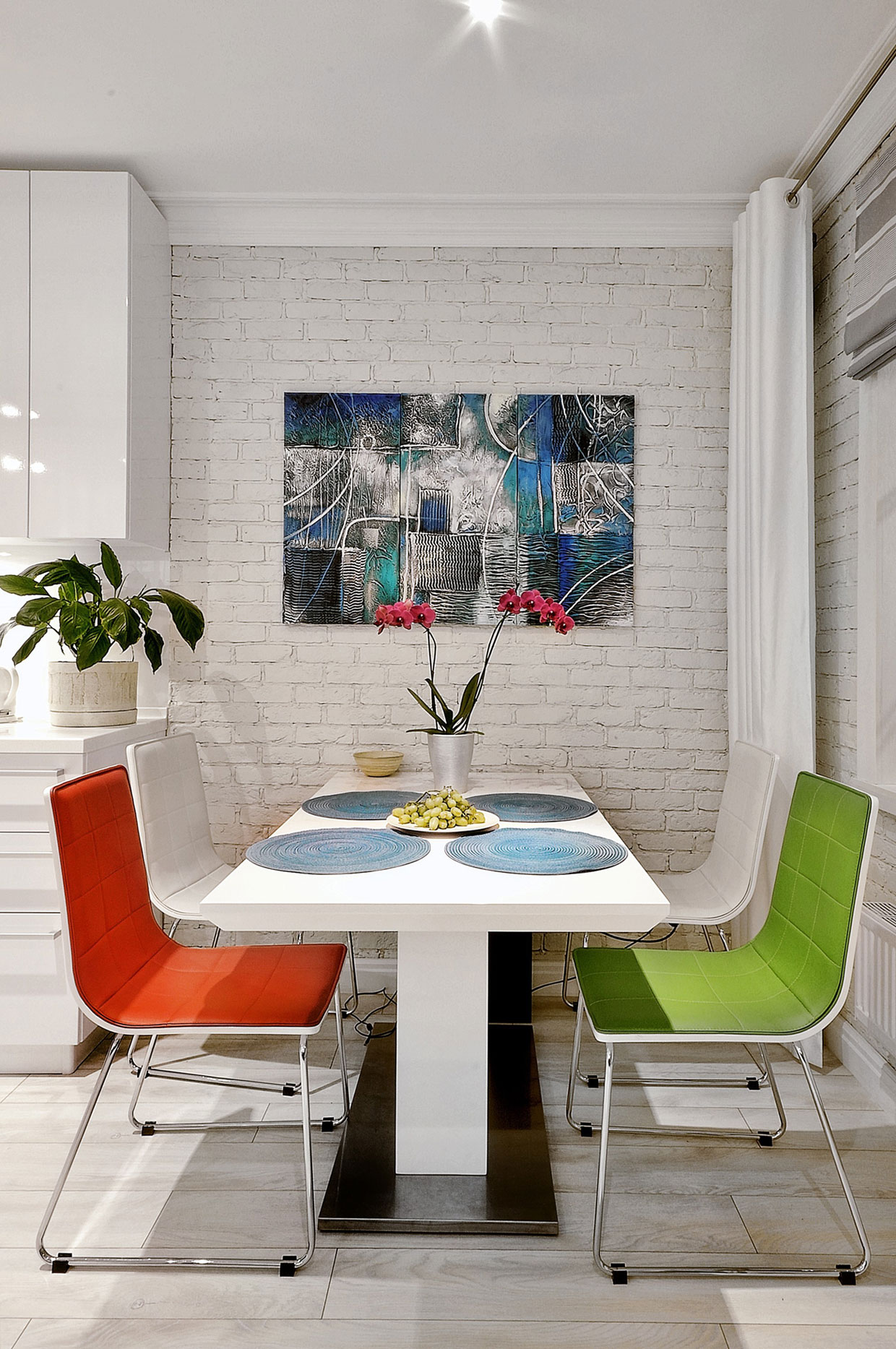 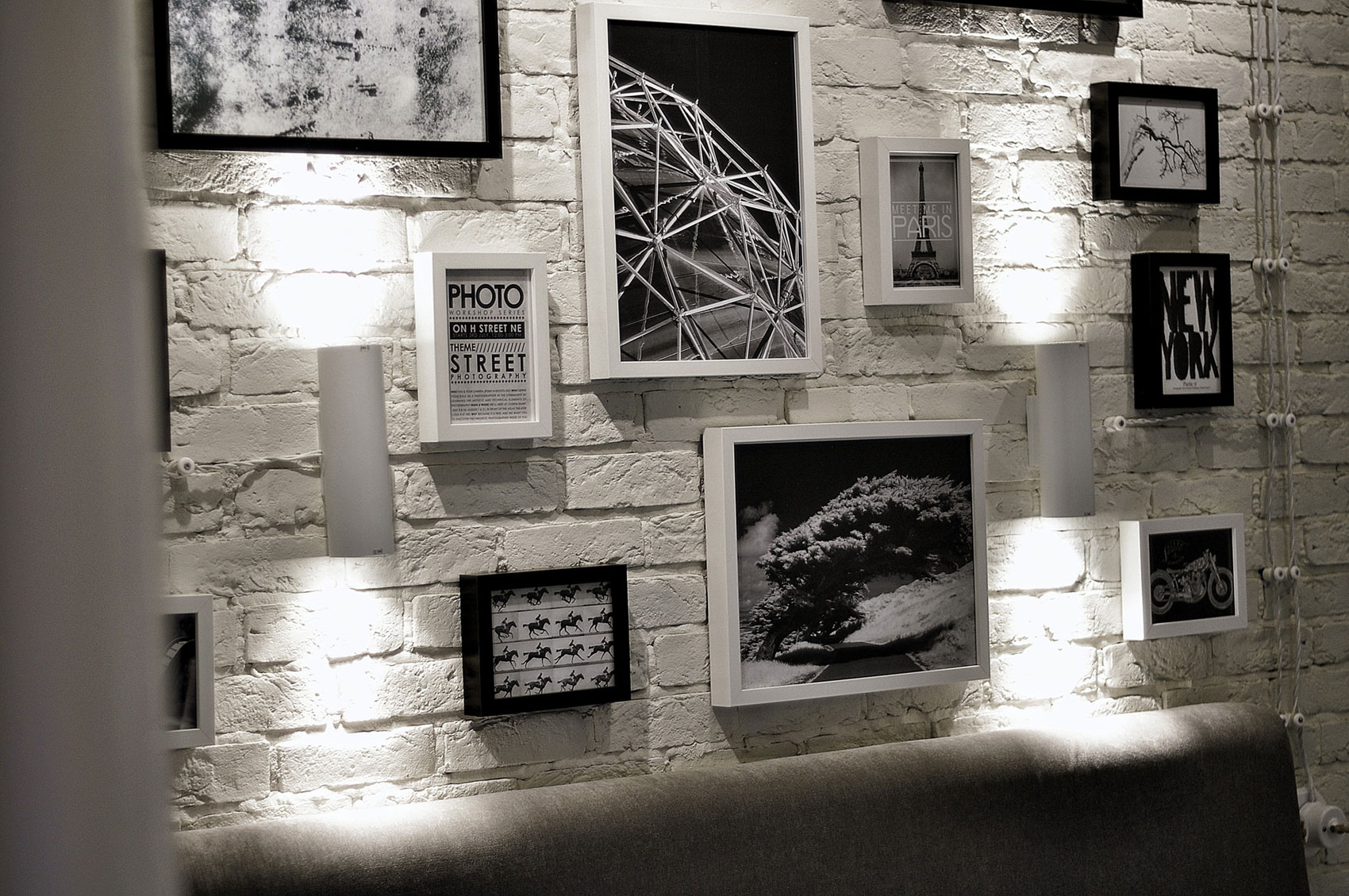 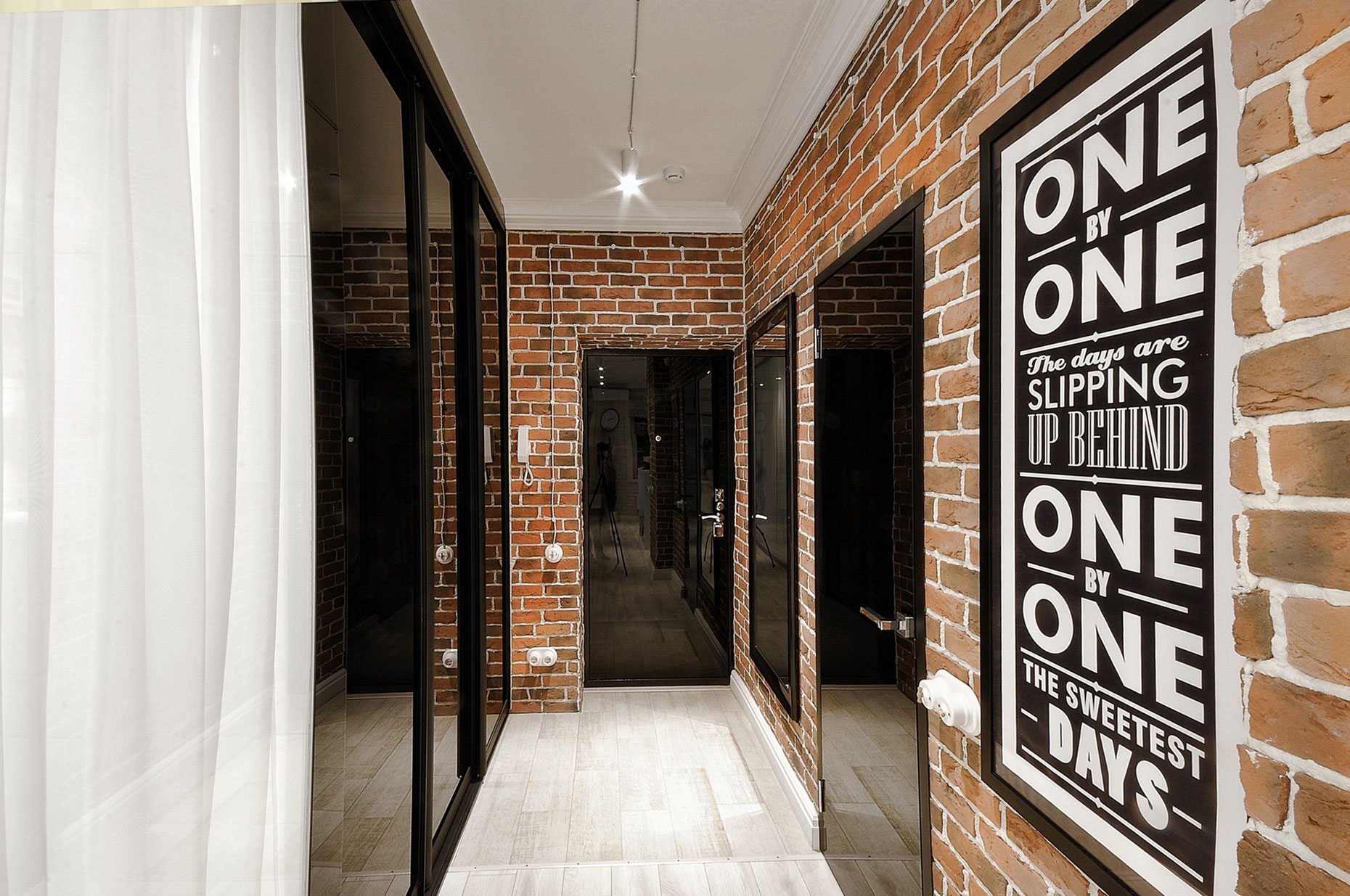 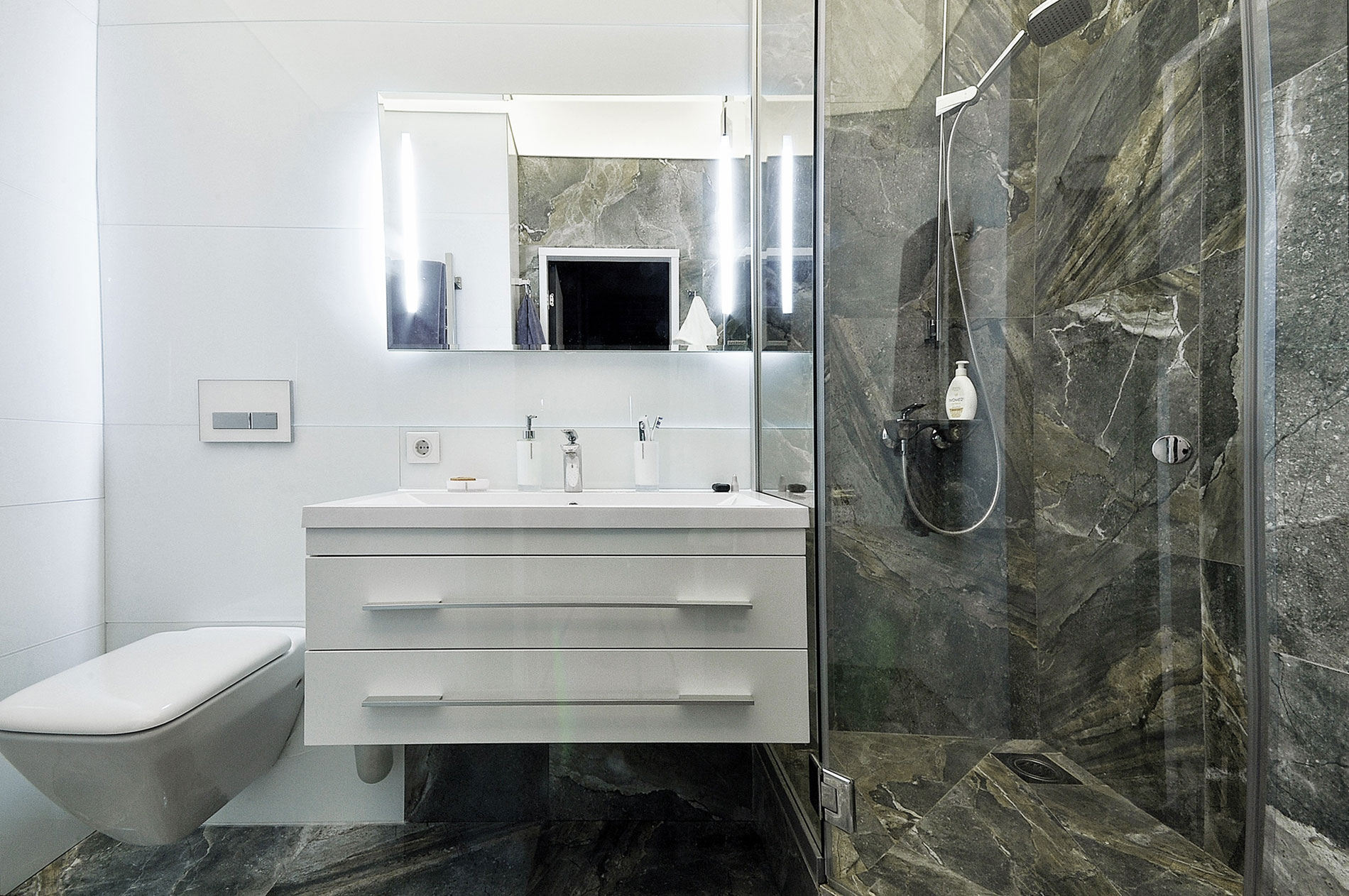 When old apartments get redesigned and remodeled, one of the goals is usually to bring more natural light in. This was also the case here. This apartment is located in Perm, Russia and the redesigning process was completed in 2014 by Allartsdesign.

The owner requested a series of major changes. For example, the apartment originally had only two windows. The desire was to bring more light inside in order to illuminate the bedroom, the kitchen and the living area and to give them an airy feel.

In order to solve this problem, the architects created a series of divisions made of glass to separate the different areas. The glass allows each area to serve as a distinct space and, at the same time, it lets light pass through and get into all the zones, even those without windows.

Light, breezy curtains hide the glass-encased bedroom, thus visually separating it from the rest of the apartment but still maintaining an airy appearance throughout.

The living area occupies a windowed corner and is furnished with a comfortable L-shaped sofa and a wall-mounted bookcase with open cubbies for displaying various items and decorations. The patterned area rug introduces a series of cool accent colors which are also used in the bedroom.

The kitchen is now directly across from the bedroom. It’s a large and open space with glossy white cabinetry and a freestanding bar with a built-in TV which can be viewed from the bedroom but also from the social areas.

The minimalism present in the kitchen is also reiterated throughout the apartment. However, because white was chosen here as the main color, the simplicity has a stronger impact.

There’s also a contrasting glossy black wall in the kitchen designed the same way as the white portion. It has built-in appliances and hidden storage and it balances out the décor in a really chic way.

The dining space is in the corner, adjacent to the kitchen. The whitewashed brick walls offer this particular a more welcoming look, allowing the atmosphere to be cozy and pleasant. However, the overall décor remains modern thanks to the use of minimalist furniture and bold accent colors.

Natural materials were used when remodeling the apartment. The flooring is bleached ash and a lot of walls are covered in brick. The bedroom gets to enjoy the warmth and charm offered by the brick wall as well.

The headboard is placed against a gallery wall decorated with black and white framed photos and images.

The hallway allows the brick to showcase its natural beauty.

The bathroom features a marble shower and a simple design throughout. The walls were painted white to enhance the spaciousness of the room.