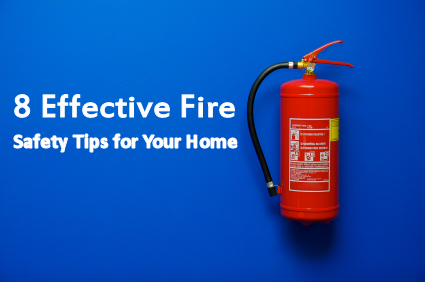 A lot of fires break out this time in the city. Perhaps it is the urban congestion and summer heat, but certainly, carelessness is at the root of fire incidents.

According to the latest report released the Bureau of Fire Protection, out of 257 fire incidents last year, 27 percent or a total of 2,284 were electrical in origin. This includes faulty electrical connections, overheated electrical appliances like air conditioners, flat iron, electric fans and the like. The other leading causes are enflamed cooking, heat combustion, bonfires and flammable liquids.

Fire prevention is a never-ending concern. But once you get the hang of it, you will see the benefits in the long run. Here are 8 effective fire safety tips that you can do:

•           When replacing busted fuses and circuit breakers, use appropriate amperage rate and never replace a busted fuse with a metal strip or any material that conducts electricity.

•           Avoid plugging high-amperage appliances (such as heat-producing appliances) in the same circuit.

•           Do not attempt to change old outlets with modern models. Leave it to a professional electrician.

•           Defend the kids from electrical shock through setting up plastic safety inserts in idle outlets.

•           Keep heat-producing electrical devices (for example, flat iron and cooking range) no less than a meter afar from light materials that will burst into flames so easily. Supply abundant space for television, stereos and personal computers to prevent over heating.

•           Do not attach electrical cords next to the wall, from corner to corner on doorways and furniture, or put them beneath the carpet, on outside lawns, or in regions where they can cause dangers.

•           Keep lamps in safe locations where they cannot be knocked over or reached by children.

Some say that being a fire victim is a lot worse than being a theft victim because once your house is burned, you have nothing left to spare; unlike if you are victim of robbery or theft, you only lose certain things not all of them.